Today’s post is about our oldest dog Tyra.  Tyra, whose nicknames include Tyra Belle, Big Dog and occasionally The Saint (refer to the many posts about Mandy and Darwin to understand why), does not exactly receive equal time in this blog so today I wanted to focus on her. 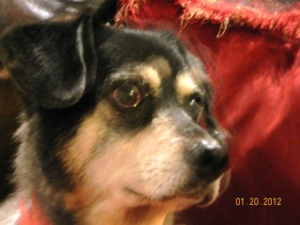 Tyra, looking up from the love seat

The main reason Tyra doesn’t receive more time on this blog is not that we love her any less than the other two dogs, but simply because she is the best behaved of the three dogs so she often gives me the least to write about.  To be honest, she is the best behaved of all five dogs we have ever owned, and that is saying something!  Tyra’s main goal in life appears to be to please us, while Mandy’s goal in life is to be happy and maintain her excellent self-esteem, and Darwin’s centers somewhere between playing and getting really good back scratches whenever possible. 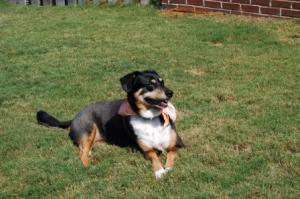 Tyra, 10 years old now, is an Australian Shepherd mix, we think, and came to live with us on February 14, 2004, about 10 1/2 months before Kayla came.  She was three when we selected her from the Humane Shelter.  The sign on the run she was sharing with another dog said that she was a Rottweiler mix, but I have lived with this dog for almost eight years now, and there is no Rottweiler in her anywhere.  We weren’t sure what she was until one day when we saw a picture of an Australian Shepherd, which was spot on to what Tyra looks like when we let her hair grow out.

Tyra was taken to the Humane Shelter by the first family that adopted her and left, the reason being that they had a baby and “didn’t have time to care for her anymore.”  I always have thought that to be incredibly sad for Tyra,even if incredibly lucky for us; I don’t know how you could do that to a dog as loving as she is.  She still has nightmares occasionally, when she will start to moan in her sleep – whether it is about that experience or something else, I don’t know – but a soft touch and just a whisper that everything’s okay and she’s safe with us at home soothes her, even if she doesn’t wake up. 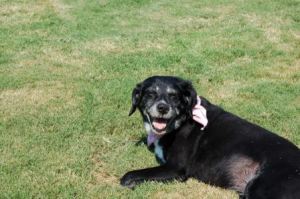 When we got Tyra, our first dog, Shadow, had been dead for over a year, and I was starting to worry about our second dog, Woof, and how lonely she seemed to be getting.  Mark and I went to the shelter that day to select a dog, and as we were looking over the runs, we came across a pair of medium-sized dogs kenneled together .  One of the signs on the run said, “My name is Tyra, and I can sit!”  Mark said, “Sit,” Tyra sat, and the rest is history.  I haven’t seen her sit on command too many times since then, but bless her heart, the one time in her life it counted, she pulled it off!

Tyra and Woof Camping in the Travel Trailer

Woof and Tyra had a cordial, not necessarily close relationship.  Or at least that’s what I thought until the day we went camping and I was walking both of them, and Tyra thought another dog was about to attack Woof.  Tyra immediately went into defense mode, and there is no doubt in my mind whatsoever that Tyra would have done anything possible to defend Woof. 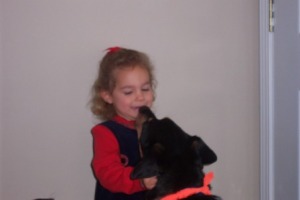 Kayla and Tyra, 12 days after Kayla came to live with us

Tyra and Kayla have a sweet bond.  Kayla took to Tyra almost as soon as Kayla moved in with us.  When Kayla learned that Tyra had only been with us since February, (remember, Kayla came December 1, 2004), something clicked and the two of them have for the most part had a rapport ever since.  Kayla does not boss Tyra around like she does the other two dogs, but is always sweet and gentle with her.  When she plays school, using the dogs to populate her pretend school world, Tyra is never a student.  Once, Tyra was the school nurse; another time, when I was unavailable, Tyra was the principal.

Kayla's First Visit Ever To Our House With Mark, Tyra and Woof in the Picture

We learned quite by accident that Tyra also is prepared to do whatever it takes to protect Kayla.  One day when Kayla was four, Mark was grilling outside in the back yard and Kayla was with him.  Kayla heard the door bell ring, but Mark didn’t, so she went to open the door.  (That was a whole separate conversation.)  When she opened the door, there was a teenage boy there that she didn’t know, and Kayla got scared and screamed.  Tyra flew from the back yard down the hall to the front door, pushed Kayla to the side, and chased the teenage boy and his three friends (all of whom, bless their souls, were only asking for directions) onto the hood of their car in the 10 seconds it took Mark to realize something had happened and get out there as well.

Tyra is not, however, without her quirks.  After all, she is only  canine!  She absolutely loves camping, and bananas.  All the dogs like going for a ride, but when we had our travel trailer, she would absolutely lose her mind as soon as she realized that we were going on an expedition.  She would laugh from the time we got in the car until we returned home.  I had never seen anything like it.  As far as bananas go, they appear to be a miracle cure for her for everything from arthritic hips to fatigue.  The mere sight or smell of a banana will start her prancing like a three-year old dog again.

Why Won't They Give Me My Spot?

Tyra’s evening routine requires that she be given a seat on the couch beside Mark.  We got this picture of her on the sofa recently, when I was on one side, and Kayla was on the other side of Mark.  She does not look happy!

All was well, though, once she was placed in her favorite spot.

Tyra also gets extra privileges now that she has attained the status of the official geriatric dog in the household.  See, Life with a Geriatric Dog.  These include elevator service onto our bed every night and occasional joy rides in the car with Mark, Kayla and I while the other two dogs are left at home.  She also is indisputably the leader of the three dogs, although they all three of them ultimately defer to Mark.  She is a benevolent leader, fortunately, and we have been amazed at the restraint she has shown towards both Mandy and Darwin.  They really have to work at it to hack her off. 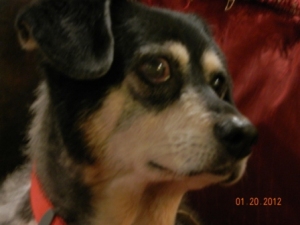 You will notice in some of these pictures that one of Tyra’s eyes is much larger than the other.  That is due to a condition called canine glaucoma.  There is no cure, and both we and our vet believe she can’t see out of that eye any more, but it doesn’t seem to have slowed her down one bit.  I watch her when she play wrestles with Darwin (they have their own version of mouth wrestling; I have yet to figure out any of the rules besides the cardinal rule, which is that Tyra wins.  Always.  No matter what.) and she just seems to look at him out of her other eye with a twinkle that says, “I can still beat you, even with one eye tied behind my back – but I won’t take advantage of you, even so.”

Have a great day !