Cars I Have Known – George I and George II

Most Americans spend a lot of time in their cars.  At least, most Americans in the mid- to small size cities without subways and good bus systems do, as do most of us in the rural areas.  In the rural/small town areas of this country, in fact, cars are essential to reach the bigger cities when we need doctors whose specialities aren’t present in our community, more advanced hospital treatment than our solid, dependable and beloved local hospitals can provide or we need to buy various items that we can’t find in our towns.  In small towns and rural areas, our cars are also essential just so we can get to our jobs, which often are located somewhere other than our town or community (trust me, there isn’t bus service between two small towns such as, for example, Rockford, Alabama and Goodwater, Alabama).   My commute is about a 45 minute commute (35 miles) and I am lucky to have such a short one.

For whatever reason, some cars stay just cars the entire time they are with us, while we each have other cars that rank as “special” cars – cars that somehow were not “things” but personalities and that, beyond all reason or explanation, we learned to love.  My first car and its later successor were such cars. 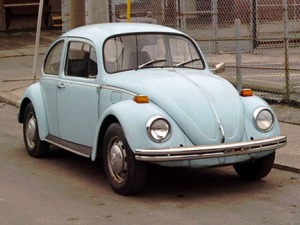 George I was “my” car until I graduated from high school and went to college, leaving him in the worthy hands of my sister.  He was a 1960’s something light blue Volkswagen Bug.  (The official name of the Bug was the Beetle, but somehow Bug stuck in the imagination of the American populace.)  George II was a gift from Mark for our anniversary years ago.  Mark found an old Volkswagen Bug for sale, and in secret renovated the car to look exactly like George I.  It was a wonderful gift!   (Both cars were in our possession before the age of the digital camera and so unfortunately I don’t have pictures of them to share with you, but combing the internet I have been able to find pictures that come very close to what George I and II were like). 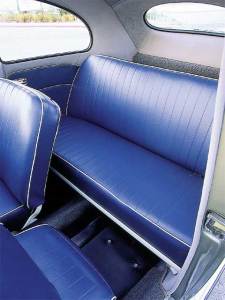 The Back Seat - Note how the driver's side front seat is folded back to give you access to it.

George I stayed in my family from the time I was in about 2nd grade until after I was married, a span of almost 20 years.  For those of you who never got the chance to meet a Volkswagen Bug, it was a very basic vehicle.  It only had two doors, and to reach the back seat you had to pull a lever that would allow the front seat to pull forward.  George I and II’s interiors were black. 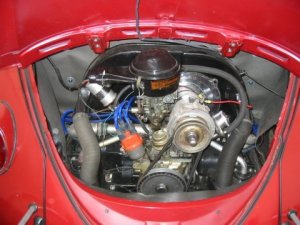 A Bug Engine in the back of the car 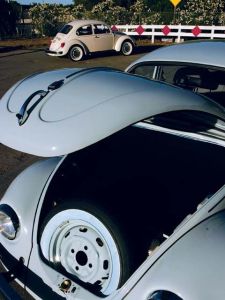 When I was about Kayla’s age, our family was stationed in Taiwan as part of Dad’s job in the Navy, and during that time period George was the family car.   George’s back seat could comfortably fit three small girls, and if you threw in the boot, we could squeeze in a few more children at least.  One time, George managed to transport four adults and five children on a trip outside of the capital city, Taipei.

The space between the back blue seat and the grey fabric on the wall that you can see if you look closely was the boot.

What was the boot?  I haven’t been able to find a good picture of it yet, but the boot was basically a space in the back of the Bug between the back seat and the back metal part of the car about 12 – 18 inches wide and four feet deep and as long as the body of the car, which wasn’t nearly as expansive as it sounds.  Still, it was big enough to fit small children (hush – this was before mandatory seat belt laws and air bags) and a bag or two of luggage. 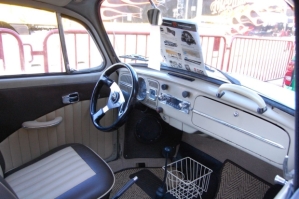 Sample front interior of the original Bug. Ours didn't have a basket.

The interior of the Bug was unique also.  The steering wheel was narrow, and had the then Volkswagen symbol, an outline of a castle, in its center where the horn was.  The Bug was solely a manual transmission car, so the gear shift was the lever in the center hump of the floor board.  The Bug had no air conditioning, beyond what I called 4 – 55 air conditioning (4 windows open at 55 miles an hour), which made driving in Alabama in the summertime once the Bug became my chariot in high school interesting, to saw the least.  The Bug had a heater though.  The heater was in the floor board and powerful enough that you would have to move your ankles out of the air flow every so often if you didn’t wish them to be burned.  (Why didn’t I just turn the heater off?  Because the heat, as plentiful as it was on the floorboard, hadn’t quite risen to the top of the car yet.) 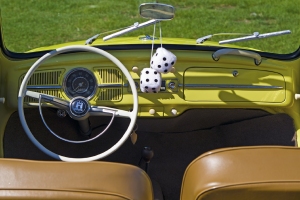 Note the Castle symbol on the steering wheel - and no, we never had fuzzy dice on our rearview mirror.

Both George I and George II were faithful, uncomplaining, dependable and in spite of their idiosyncracies incredibly fun to drive, and I miss them even while I am grateful for my current vehicles and the modern comforts they provide. 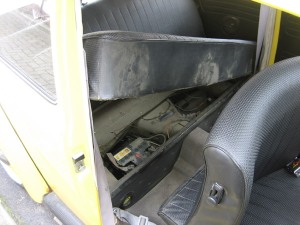 Oh – and the battery was under the back seat, and you had to remember to add water to it periodically.

What about you?  Do you have a car in your past or present that has been more than just a mode of transportation for you?  I’d love to hear about it if you do!