Good morning everyone!  We have made it to Wednesday, and the weekend is in sight.

The same thing happens to me every spring – no, I don’t mean allergies.  At some point in the spring, I find myself wandering through the garden section of  the local Wal-Mart or Home Depot, looking at all of the flowers and vegetables that are available.  Even though I know any flower I plant has a less than 40% chance of survival (it’s the whole watering thing that gets me), visions of luscious gardens on a par with those at Calloway Gardens or Bellingrath gardens dance through my head, causing me to fall into some kind of a trance.  I wake up from the trance headed toward the car with a buggy full of flowers to plant that probably will die since they are not cacti and can’t live without watering.  Sigh.  I did manage to restrain myself somewhat this year; I got two big pots of peonies for the front porch (last year I managed to keep two similar pots alive through about June), some grass seed and fertilizer to use on bare spots in the back yard, and then caladium, lily and gladioli bulbs for two specific (small) areas in the front.  I envy all of you out there who are great gardeners!

On to the roosters – here are two pictures Mark took for me of a rooster in Key West. 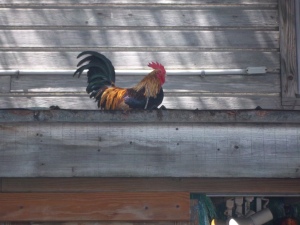 The most unusual thing about the roosters of Key West is the fact that is it not unusual to see one – they (and the hens and chicks) wander the streets freely and are protected from any harm by a city ordinance.  I never did quite figure out why there are so many of them and why they are allowed the run of the city streets, but they don’t bother anyone  and their colors are striking.  We not only saw a lot of roosters, but a couple of hens with their chicks following them at various places.   I was trying to imagine what it would be like for our family to live in Key West, and couldn’t get much past the image of No-no (Mandy) and Bad Dog (Darwin) repeatedly escaping from our yard to chase the roosters, and being brought back by the Key West police with multiple citations for us to deal with!

For those of you who were wondering where Kayla was in the middle of all of this, she was having a great time with her Grandma Dottie.  One day, for example, they went to the butterfly farm, where no less than three butterflies landed on her!

Mom said that Kayla sat still as long as this butterfly was sitting on her foot, and that that was several minutes!  One of the attendants was kind enough to take their picture together.

You have to look really close at Kayla to see it, but there is another butterfly on the foot that is toward the front, which is why she is standing so still.

Kayla likes a lot of insects.  About the only ones she doesn’t like, and won’t handle or come near, are stinging insects like bees and wasps, spiders and cockroaches.  I have learned how to kill spiders if called upon to do so (revolutionary though that is to those who knew me in my youth) but I still won’t do cockroaches.  Mark has to be called in for a job like that.  Fortunately, we have only had one to kill the four years plus we have been in this house, and it conveniently appeared on a night when Mark was home!