Today we are going to take a walk into improbable reality:  the lichen.  While we tend to think of and treat lichen as one organism, it actually is composed of two (or more) organisms living together for each other’s benefit:  a fungus and an alga.  The fungus provides structure, support and water for the lichen, while the alga produces food through photosynthesis.  Because of this symbiosis, lichen are not considered to be plants.  (They aren’t animals either, nor minerals – so how do you answer the question “Is it animal, vegetable or mineral?” when it comes to lichen?)

Lichen on Firewood by a House, Photo Credit: Nancy Eady

I became curious about lichen while we were living in our rental house.  The house owner had cut up a tree on the property, and placed the logs by the house.  Over time, rows and rows of fan-like shapes began to grow on the ends of the logs.  I took a picture of them, above.  As best I could determine, they were a kind of lichen. 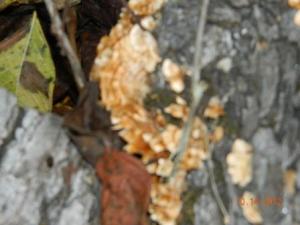 Lichen are ancient survivors.  The oldest known fossil showing both symbiotic components of a lichen is 400 million years old, FN,  so it stands to reason that lichens are even older – it is highly unlikely that the first ever lichen was also the first lichen fossilized!  The variety and distribution of lichen is astounding.  There are over 20,000 known forms.  There are lichen that can colonize the most inhospitable of places, such as bare rock in the arctic, lichen that process and help break down inorganic matter such as wood, and lichen that seem to drift airily down in strands off of bushes and live off of the air.

Lichen can live for astoundingly long periods of time; in fact, one lichen from the arctic circle is estimated to be 9000 years old!  I keep looking for a picture of this ancient lichen, but I haven’t located one yet.  I do know that the ancient arctic lichen is a member of what are commonly called “map lichen.”  As you can see, they get their name from the shapes they form on rocks, which resemble maps.  Their growth rate is incredibly slow, yet predictable, so they can be useful tools in dating other objects.  The use of lichen to date objects is called “lichenometry.” 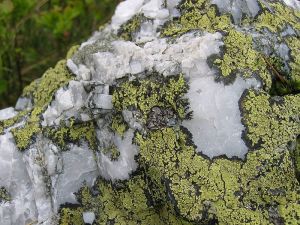 Lichen also provide scientists with helpful information about air pollution; most lichen are highly sensitive to air pollution, so if there is an area that normally would host lichen, yet has none, the air quality around the area is likely poor.

Lichen, Acrylic on Duralar, By Aaliyah Gupta, Copied with Permission from the Artist

I have a friend in Seattle who is an artist, Aaliyah Gupta, and she worked on a series a few years ago exploring the symbiosis that creates lichen.  Her work is stunningly beautiful, delicate and unique, capturing the intricacies of a symbiotic dance that has persisted through the ages.

Lichen, by Aaliyah Gupta, Acrylic on Duralar, All Rights Reserved, Copied with Permission from the Artist

God’s handiwork is astounding.  Nature’s variety and inventiveness is unparalleled.  Taking the time to learn about other organisms on this planet always pays dividends – if only to make us realize how privileged we are to be part of the complex web of life traveling on Spaceship Earth!

FN.  400 million years ago was the “Early Devonian Period.”  During the Early Devonian, plants and animals began to colonize land, while aquatic life was farther along and more diverse.  In other words, lichen pre-date dinosaurs, flowers, trees and grass!