Before we had three dogs, we had two dogs:  Tyra, whom you already know about, and an older dog whose full name was J.P. Wooflesnort (which stood for “Just Plain Wooflesnort”).  Most of the time, though, we just called her Woof.  I called her my kitchen dog, because no matter what I was doing, whether it was cleaning the kitchen after everyone else had gone to the other room, or sewing or just reading in a room by myself, she always stayed with me.

Woof ended up being the most flexible geriatric dog I have known.  Not only did she adjust to the death of our first dog, Shadow (who was a character in her own right), but she also adjusted to the adoption of Tyra, the adoption of Kayla, a move to a new home and the adoption of Mandy – all after the age of 9!

Shortly before her birthday one year, Kayla started lobbying for a dog of her own – she said that Mark had Tyra as his dog, I had Woof as my dog, and so she wanted a dog that was hers.  In a fit of madness, I decided to help her in her lobbying efforts, and, because he loves us, ultimately Mark told us we could go to the Humane Society one Sunday to see if we could find a lab or golden retriever to adopt.

Before he could change his mind, I loaded Kayla, Tyra and Woof into our Chevy Tahoe and headed off to the Humane Society.  I didn’t take time to change, so I was in my church dress and heels.  When we got there, I took Kayla with me, and left Tyra and Woof in the car.  We went in, filled out a form, then I told a very nice young man that I needed a dog that was child friendly, other dog friendly, and housebroken.  He brought Mandy out to us.

Kayla loved her immediately, and even though I did notice that she did not particularly resemble either a lab or a retriever, she seemed to have a good temperament, so I told the shelter I would like to take her for a walk with my dogs.  So, shortly thereafter, I took Mandy out on a leash from the shelter and walked her with Woof and then Tyra.  That went swimmingly, so Kayla and I finished filling out the paperwork and paid the adoption fee, then went to put Mandy in the truck.

Because she didn’t come with a collar, I purchased one for her from the shelter, put it on her and tried to walk her out to the truck (which I had running to keep the air conditioner on for the other two dogs.)  Because the collar was too big, as I lifted her up into the truck, she started to struggle, slipped out of her collar and ran away towards the back side of the shelter.  I started to fly after her as best I could, and was helped by the fact that she stopped to watch a couple playing with their new puppy.  They held her for me until I could get there, then I carried her back and tried to put her in the truck a second time.  I don’t suppose she had ever been in a car or truck before, because she immediately slipped out of her collar for the second time, tore around the building and stopped at the same couple, who were still helpful, but couldn’t help but be amused at the sight of me flying back around the building in heels and a dress for the second time chasing after my new, ungainly dog.  The third time, as always, proved the charm; that time I held on tight enough to make sure she got safely into the truck, slammed the door shut, rushed over to my side of the car, pushed her back onto the passenger’s side to prevent her running out the driver’s side, and we headed towards home.

However, Kayla and I decided on the way that we had to get Mandy a collar that fit her, so we stopped at Pet Smart before we got back to the house to try to find the right size collar.  We knew we couldn’t walk her in there on a leash, because she would run away again, but she is a very heavy dog to carry, and we had had to park at the back of the parking lot, so I had the bright idea that we would wheel her into Pet Smart in a grocery cart, thinking that she would not be able to jump over the edge, given that she was so short.  Mandy quickly proved me wrong, teaching me the important lesson that body length can make up for short legs, and sailed out of the grocery cart, running pell mell for the door of Pet Smart across the parking lot, completely oblivious to all cars coming her way and giving me my third run for the day in a dress and heels.

I knew in an instant that rather than have obtained a special present for my little girl, I was about to scar her for life by having her see her dog hit by a car, but Mandy was born under a lucky star, and cruised safely to the door of the Pet Smart, where another kind person held her for me until I could get to her.  I ended up carrying a fifty-five pound dog through Pet Smart in search of a small enough collar with a little girl beside me eager to share the story of the afternoon with everyone we met.  I can promise you that the collar we picked out definitely fit!

Once we finished that purchase, we hauled Mandy back to the car on a leash, where the other two dogs were patiently waiting, then returned to the house where Mark was waiting to see the labrador or golden retriever we were bringing home.  Instead, he saw this: 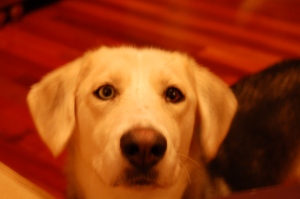 He looked at her carefully, looked at Kayla and me, and just asked, “Were they out of retrievers at the kennel?”

Have a good day everyone!

This entry was posted in dogs, Pets, When things don't go as expected and tagged daughter, dogs, humor, working mom. Bookmark the permalink.