The Magic of the Little White House

There was an article on the Atlantic web site (http://www.theatlanticwire.com/global/2011/04/worlds-last-typewriter-factory-closed/37013/ ) yesterday stating that the last typewriter manufacturing factory in the world is closing its doors.  While there is a dispute as to whether that is true, see http://www.foxnews.com/scitech/2011/04/26/worlds-typewriter-factory-shutting-doors/, all sources seem to be in agreement that the typewriter is reaching the end of its days. 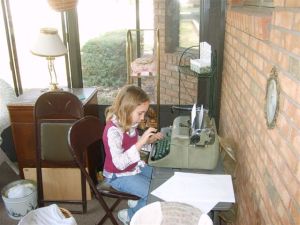 The typewriter used to sit in that most magical of places to a child growing up, the Little White House.  The Little White House was a small two bedroom, one bath house behind my grandparents’ house on their land.  When I was very small, my grandparents used it as a place for my great-grandmother to live independently, but near enough to them that they could help her. 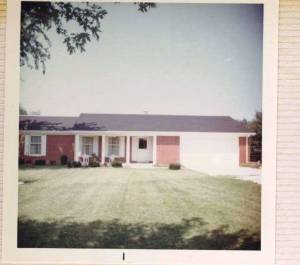 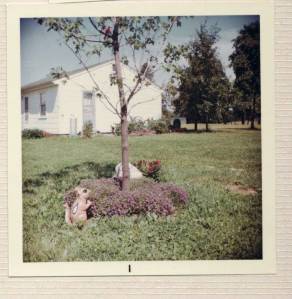 1969, The Little White House, from the Back Patio of the main house

By the time I was old enough to stay with  my sisters at my grandparents for a couple of weeks at a time, my great-grandmother had died, and the Little White House served as Grandpa’s shop and storage room.  Grandpa liked to fix up clocks, so the second (middle) room of the house had an assortment of clocks hanging on the wall, along with the tools needed to fix them.   Each of us, his grandchildren, have at least one clock that he fixed in our house.  Mine is a Seth Thomas clock, manufactured in the United States under a patent issued in 1890.  (I took the face glass out to avoid extra glare in the picture, but it is still intact.)

In the front room, there was a solid desk, probably oak or maple, and the typewriter sat there.  Grandpa would use that typewriter to write letters.  One of our favorite things to do while we were at Grandma and Grandpa’s was to go into the Little White House and bang on the typewriter to our heart’s content.

There were many other objects of interest in the house; I remember an old bed, and trunks, cabinets and cupboards that were full of fascinating objects, including old family photographs that introduced me to a whole generation of my family that had passed on long before I was born.  The desk contained Great-Grandma’s efforts to trace the history of the family, and at the time I saw it she had traced it back to the Revolutionary War. 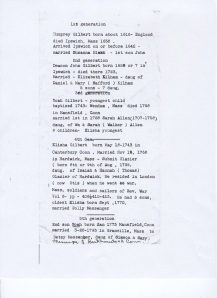 This was the last page of her research, and it was typed using the same typewriter that Kayla is using in the picture above.   The handwriting is Great-Grandma’s also.

This was Great-Grandma shortly before she moved into the Little White House.

One of the pictures we found in the Little White House was the following picture, which shows my Grandfather’s family when he was around 10 or 11. 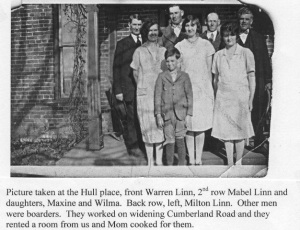 On the left side, my grandfather is in front, with Great Grandma standing behind him, and Great Grandpa further behind her.  This picture was taken somewhere around 1926 or 1927.  Pretty amazing stuff, isn’t it?

Grandma and Grandpa moved into a smaller house in the late ’80’s, but sold the old house to another couple and the Little White House is still standing.  I’m glad it’s still there, but  I don’t need to go into it again; I prefer to remember it the way it was when I was a child, fascinating, mysterious and full of treasures.

Do you have any such secret places from your childhood, magical places that were filled with thrills and adventures every time you walked in?  If so, please share your story in the comments.  I’d love to hear from you!

2 responses to “The Magic of the Little White House”