A few years ago, the Home and Garden Channel showed a home where everything, including the lights, worked by voice command.  At the time, I thought it was a silly idea, but the older I get, and the more trouble I have with light switches, I am re-thinking my position.

For example, I was leaving the office late last Thursday, from a building where I have worked for over 20 years, and found myself playing the “guess the light switch” game yet again.  (It was 10:15 at night and I was exhausted, but still…)

I am at least, consistent – I have the same issues with light switches at home.  I lived in one house for ten years; to the day that we moved, I was hitting multiple light switches in order to get to the right light.  It goes without saying, then, that after only 5 years at our current house, I still am playing musical chairs with light switches.

Remembering what switch goes with which light is probably simple for most people, but, this is just one of those areas that challenges me.  Of course, the  bewildering array of possible configurations, doesn’t help.

For example, we have two light switch panels on either side of our back door.   That means I have five switches assigned to various  lights.  I believe the set on the left controls the porch lights outside, while the panel on the right controls the lights over the dining room table and the breakfast bar.   In a further attempt to confuse the Russians (those of you who don’t remember the Cold War, please look the phrase up), the outside lights that aren’t on the porch, including the ones on the back, are controlled by a switch at the front door.

The outside porch light switch plate looks like this:

After some trial and error, we found that the switch on the right controls the four recessed overhead porch lights, while the two switches on the left side control two fans (with lights) that are outside on the porch.  This would seem to be very simple, except for the fact that there is another switch to the overhead porch lights in our bedroom.

Another deceptively simple light switch arrangement exists for the study area of the great room: 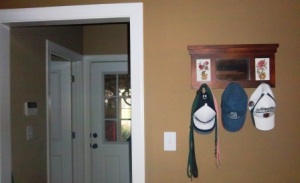 The simplicity of the light switch by the hats, which runs the chandelier in the study, is a sham – there is a second switch by the kitchen that is a double panel, one of which also runs the chandelier in the study.  Keeping the two of them in sync can be a challenge!  (Of course, I could learn that it doesn’t really matter whether they are in sync or not, but that is another column for another day!)

My favorite light switch is the one in the hall outside the two smaller bedrooms:

It runs a single light, in the hall, and has no brothers and sisters to help it out anywhere else.

The light panel switch in the kitchen has at least one switch that I can always identify:

The switch on the far right controls the garbage disposal.  The only reason it is easy to remember is negative reinforcement.  It doesn’t take too many times of hitting that switch by mistake and jumping startled 3 feet in the air before you start to remember what it belongs too!  The other three light switches I am hit and miss with – two of them have twins in other parts of the house, while the third does not.  Don’t ask me to tell you which!

It goes without saying, of course, that both my nine-year old daughter and my husband have no problem figuring out any of the light switches anywhere!