One of the privileges of being a mom is the privilege of watching our children’s imagination at work when they play.

To her great regret, Kayla doesn’t have any brothers or sisters to play with, but she uses her imagination (and sometimes the dogs) to make up for that.  I had the chance to get a peek into her play world this weekend, and wanted to share it with you.

Kayla has often said that she wants to be a teacher.  Saturday morning, she decided to play teacher, and set up her school.  When I walked in her room to check on what she was doing, I couldn’t resist grabbing the camera!

At the moment I walked in, she was taking a break.

(I admit that sparkling lemonade and pickles won’t work for everyone as a snack – it certainly doesn’t for me – but she likes them.)

Then she noticed I had the camera. 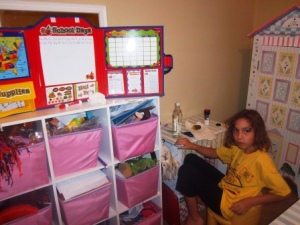 Although she wasn’t thrilled at first, she decided after a moment’s reflection that having a class photographer would be a good thing, so she continued playing.

First she taught her class: 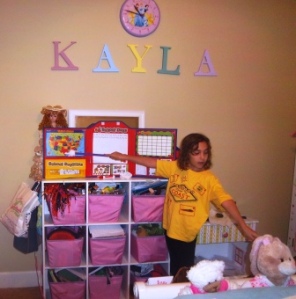 Then she allowed me to meet her students and view the various seating arrangements.  Since many of the stuffed animals in the class are old friends, I was happy to see them.

Three of the seven student class (originally it was a nine student class, but Darwin and Mandy high-tailed it out of the room as soon as I opened the door), Abby, Sparks and Ruffy (from right to left), were provided with the lid of the toy box as their desk, and were seated firmly between the toy box and the bed.  Kayla had furnished them with name tags, and allowed them to start work.

Abby and Sparks are twins, and younger than Ruffy.  They both came from the local Build-A-Bear workshop.  Ruffy is a little older; he was bought to be a little brother to Scruffy and Fluffy by my husband when he spent a week in Boston on business once.  Scruffy (not shown – Kayla said he was the oldest and was in a different class) is the first Build-A-Bear Kayla ever owned, and is a stuffed dog.  She had slipped Scruffy (leaving his sister/twin Fluffy, a stuffed rabbit, at home) into Mark’s suitcase, and about four days into the trip, Mark told her that Scruffy kept getting in trouble by turning the TV on when Mark wasn’t in his room, so he bought Ruffy to keep Scruffy company.  Kayla loved it!

The next three members of the seven student class were, again from left to right, Gatlin, Fluffy and Ana.

Kayla decided to join their picture and have a little fun at the same time:

They also had been provided with name tags and had started their work: 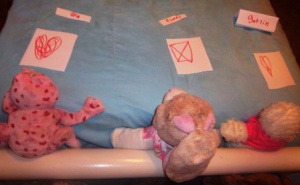 The last member of the class, Gale, was tucked behind a wooden chest, which she was using as her desk.

I think she was apart from the others because she was smaller, and Kayla wanted her protected.  However, Gale also had managed to start on her work:

Kayla set up everything I have shown you so far on her own before she ever knew that I was going to come in and take pictures.  However, we collaborated on the final pictures, since we both decided that every class needs a class picture.   The first picture was just of the students.

Then we took one of the class with their teacher.

After that, I was forced to leave the world of my child’s imagination for the much more mundane task of doing laundry, but that was okay.  Class continued until lunchtime, at which time it abruptly came to a halt as all of the students were hastily scooped into Kayla’s closet so she could eat.

This entry was posted in On the Home Front, Out of the mouths of babes...., working mom and tagged daughter, family, humor, kids, parenting, working mom. Bookmark the permalink.