Life with a Geriatric Dog

Tyra on the couch

I watched Tyra last night as she was walking up the stairs from the back yard to the porch and realized, as I have realized other times over the last six months, that we are beginning life yet again with a geriatric dog.  It is an inevitable part of the life cycle of the special friendship that you acquire with a dog.  The last years with a geriatric dog have their own joys as well as their special sorrows but I still wouldn’t trade them for anything.  Part of owning a dog is that eventually the dog will die but the joy I get from being with the dog throughout its life far outweighs the sorrows. 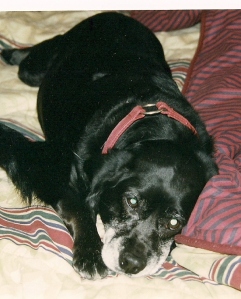 Shadow asleep on the bed when she was 15.

Tyra will be our third geriatric dog.  Those of you who have followed this blog for a while will probably remember that Shadow and J.P. Wooflesnort (Woof for short) were the other two. 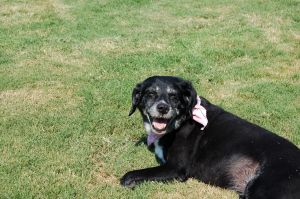 One of my favorite pictures of Woof as an older dog.

At our house, geriatric dogs get special services.  These include elevator service onto beds, couches and any other surface aged hips and paws can’t quite reach any more, (although when it is Mandy’s turn, there will be a lack of elevator service for counters on which she currently likes to graze!), first dibs on any table scraps or snacks that are handed out and help with maintaining the spot of primary dog in the house.  Tyra gets the special perk, because it is a special joy for her, of being taken for a ride periodically in the car while the other two dogs are left in their crates at the house.  The other two don’t mind so very much, but the look on Tyra’s face as she saunters out is priceless – it is very much an “I get to go and they don’t!” look. 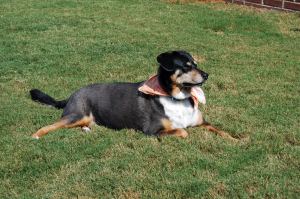 Tyra basking in the sun in the backyard.

Older dogs, at least the three we have had, mellow out a little bit.  Woof was seven years younger than Shadow.  Once Shadow was 12 and beginning to get quite deaf, Woof would often get quite excited about something that Shadow couldn’t hear, and go get Shadow to check it out; Shadow would investigate the situation and come back and tell Woof everything was okay and just to chill.

Older dogs do not lose their intelligence as they get older.  I can remember very close to the bitter end, once we knew that Shadow had kidney trouble, being told to feed her a special kind of dog food.  To break her into it, we were told to start by mixing her regular dog food with this (apparently much blander) wet dog food to encourage her to eat it.  Shadow would have nothing of that; we had about a week of her carefully picking out every dry piece of food she could find while shredding through and leaving all of the wet dog food she didn’t like.

Woof, a few months before she died.

I would like to say that older dogs get sweeter as they age, but I haven’t really noticed that.  Shadow kept that hint of ginger in her temperament that endeared her to us.  She loved us, but had the gumption to get irritated with us if we broke her “rules” about things, like if we were playing with a dog toy and she felt that we weren’t letting her get it often enough, as well as the facial expressions to let us know it.  Woof stayed as sweet as ever.  In fact, I have to say that Woof was probably the most flexible geriatric dog I know of, since she adjusted well to Shadow’s death, Tyra’s adoption, Kayla’s adoption and Mandy’s adoption all in the space of about three years, although she did nearly have a nervous breakdown the time that Kayla, at age 5, pulled Woof into the bathtub with her in a moment when I wasn’t looking.  She never again let herself be alone in the bathroom with Kayla, that was certain!  Tyra’s temperament appears to be holding steady – sweet and sane. 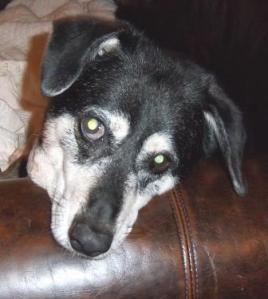 Tyra Waiting on the Sofa

For our household, Tyra has just arrived on the leading edge of geriatric status (Shadow died when she was 16 and Woof when she was 14) so hopefully, at age 10, Tyra has several years left to enjoy being queen of the household.  But she reminds me, as Tyra and Woof did each day as they aged, that each of our days together is a gift, and one I need to remember to appreciate.

But then, isn’t that true of all of our relationships?

18 responses to “Life with a Geriatric Dog”