Life in a Small Town: The Homecoming Parade

Last week was a very off week for me, since I managed to develop bronchitis (yes, again, for those of us who have been with me since April and before) but I am going to try to get back into the swing of things.  Today, I’d thought I’d share with you the homecoming parade that our town held a couple of Fridays ago.

Homecoming in a small town, especially one as small as mine, is a very special occasion.  With only three schools – one elementary school, one middle school, and the high school – you can pretty much expect the whole town to either participate in it, or to watch it.  This year was no exception.  The schools let out early the Friday afternoon before the game, and the parade started promptly at 2.

Here are some of the people starting to congregate about 30 minutes in advance.  This was one of the less densely populated spaces but by the time the parade begins, both sides of the road are solidly lined with people for the eight blocks of the parade route:  from the high school, through downtown, over the bridge by the dam and then by City Hall and the town library.

Parades in my town usually begin with a police escort, so the excitement began to build once we could see the lights of the police K-9 unit leading the parade in the distance. 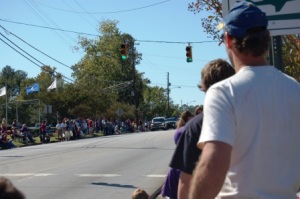 Once the first police unit came by, a few other police cars followed, then trucks filled with city councilmen throwing candy at the bystanders came next.  (This is a tradition apparently unique to our town, but every parade has people with boxes and boxes of candy to throw out to the crowd.)  I especially like it when you see someone particularly enjoying himself while he does it.

Having fun with the job!

The next group to arrive were the high school varsity football players. 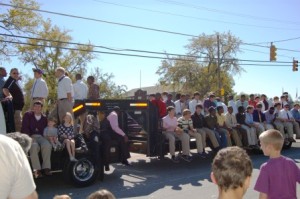 The football team was followed by the high school’s marching band, which is a very good band, especially considering the size of our town and our high school.  The band consists of the majorettes, the flag corps, and then, of course, the musicians.  Their uniforms, which sport the high school colors of purple and gold, are resplendent in the sun.  (I suspect that an LSU fan who wandered into our town during the parade would have an eerie deja vu sensation, since the colors are very like those of the LSU Tigers, and our team is named the Tigers also.) 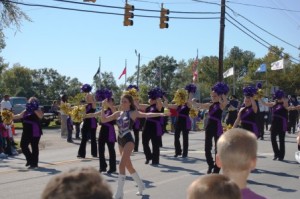 The band is led by the majorettes and flag corp.

The musicians come next.

And the Drums Play On

Eventually, the Homecoming Court came by on their own float.  This float is always Kayla’s favorite, and since her baton class participates in the parade, she expects me to take good pictures of it.  I never really thought about it before, but it must take a great deal of poise to sit on a truck-driven platform on a folding chair wearing an evening gown and waving gracefully.   (Obviously, the tiger behind the Homecoming Court is NOT wearing an evening dress; he is one of our mascots.)

I found out later, in the following week’s paper, that this lovely young lady ended up being Homecoming Queen.

A number of other groups and floats passed by, including the varsity cheerleaders riding in the back of a pickup truck, several baton groups from the various groups around town, and the class floats.  In front of each class float were class representatives, mostly riding on top of convertibles.  My favorite class float was the Freshmen float and representatives.

I liked the representatives because they had the courage to be different:

And the Freshmen float because it had a more original slogan then the other three – all of their themes involved either harming Eagles or making them mad.  (Our town doesn’t have anything in general against eagles; that was just the name of the team our team was playing.) 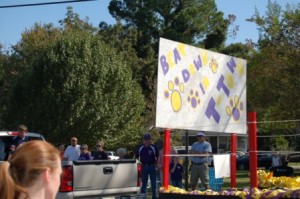 Beat Down in T-Town

My other favorite float was the Future Farmers of America’s float.  I just thought it turned out nicely.

From my perspective, though, the most important part of the parade had yet to pass.  Before that part reached me, though, the Youth Football League put its players on display:  the Midgets, the Crickets and the Termites.  Some of the squads have age-matching cheerleaders, too. 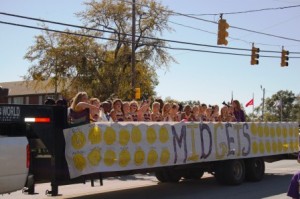 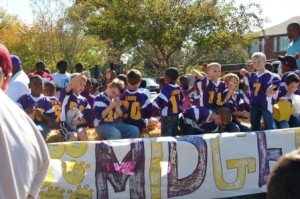 The Cricket football players were throwing candy enthusiastically with an eye to strengthening their arm:

But the Termite players showed more restraint – or then again, maybe not! 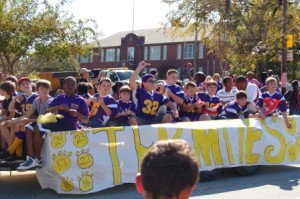 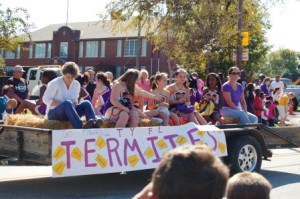 Then the moment I had been waiting for arrived – Kayla’s baton group showed up!  I almost missed it, too; somehow Kayla looked so much more grown up in the parade then I expected her to. 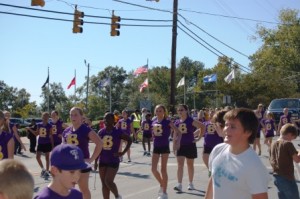 I managed to recover in time to get two pictures though. 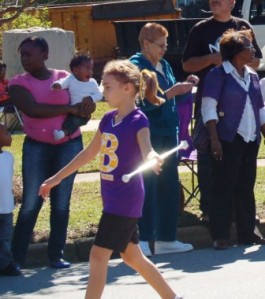 An array of the middle school players and cheerleaders and other organizations followed as well, and then the parade that began with a police car ended up with a fire engine.

The end of the parade

So all was well that ended well, and a grand time was had by all – and we won the game that night, which now puts us into the high school playoffs!

6 responses to “Life in a Small Town: The Homecoming Parade”