What a week!  I’ve been trying to write this post since Tuesday, which was the day we got back from a mini-vacation to Orlando.  Tuesday for whatever reason my internet didn’t want to load pictures (and how can you talk about a trip to Orlando without pictures?) and then I ended up working until extraordinarily late to get a brief filed.  (By extraordinarily late, I’m talking about times I haven’t seen since I was in college!)  Then yesterday I had an 8 a.m. check-up which involved fasting beforehand (nothing to eat from 12 until 8 – I am not exactly Miss Merry Sunshine in the morning anyhow, but me without food in the morning is an unhappy combination!)  Then, the check-up over and breakfast procured,  I went to work to recover from my late night session Tuesday, which translates to trying to get enough papers moved to see the wood of my desk top and pushing forward with other projects.  It felt good last night just to come home and collapse – I was in bed by 8:30 and asleep by 9:20, which was great!

A visual depiction of my week so far!

But now we have reached Thursday and I have yet to post for this week, so I better get started.

As I’ve already mentioned, we spent this weekend traveling – Kayla went to visit my Mom, who had bought the two of them tickets to see the Broadway musical “Wicked” this past weekend, and Mark and I decided to take advantage of the weekend to go to Universal Studios in Orlando, Florida.

Mark and I did have a good time, but I want to talk today about our first evening there, where sunny Florida was not sunny (but only because it was night) and COLD! The night-time temperatures when we were out and about walking were down in the high 30’s. (For those of you from colder climes who think the high 30’s is downright balmy, I suggest you try coming down here to Alabama or Florida in July when our temperatures are in the mid-90’s or higher with 200% humidity, and you will understand.) 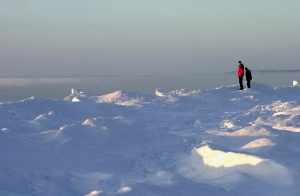 All right, I admit it wasn't as cold as this!

It was so cold, in fact, that I had to pull out The Squash to wear. The Squash is a bright yellow fleece that I have had for ages; I used to wear it often with green gym pants which made me sort of resemble a summer squash, which is how it got its name. The Squash is one of my favorite fleeces – brightly colored and extraordinarily warm, with sleeves that are too long – just too long enough so that I can pull my hands into them and let the sleeves double as gloves when I need them too. Long live the Squash!

Me in The Squash at Islands of Adventure

But I digress (I can hear the shocked gasps!) We didn’t want to go to either of the parks in the evening, because they weren’t going to be open that late, so we decided to go to City Walk, an entertainment area Universal has constructed in an area between Islands of Adventure (their second theme park) and Universal Studios (their first theme park.) After we got lost trying to find the walking path from our hotel, the Loew’s Royal Pacific, to City Walk, then finally retreating to the lobby where, starting from the point of origin we finally found the path, we had been out walking in the cold for about 25 minutes and were glad for a chance to sit down in the warmth at the restaurant we had chosen for dinner, called Pastamore.  At least, it started out warm, but once someone decided to open some large panels in the front, the temperature quickly plummeted.

The Beginning of the Islands of Adventure Theme Park

When we finished eating, we decided to walk around CityWalk and look at some of the shops. There are a lot of nightclubs there, too, but we were planning on an early day at the theme parks and didn’t want to stay up that late. The shops were interesting, but they were all cold. I think they had heat, but the fact that they left two doors open at all time caused most of the heat to float away in the night sky. Because they were cold, we didn’t really want to linger.

Until we came to the Fossil Store. For those who don’t know, Fossil is a company that makes watches, wallets, purses, some jewelry, belts, and some briefcases/satchels. Mark and I like what they sell, but at first we just intended to make a brief sweep of the store and go on. That is, until we entered the store and found that someone had the good sense to close one of the two doors to the shop and keep the heat in. It was blissfully warm in there! Nor were we the only tourists who had a sudden penchant to linger around the store that evening; I counted about 15 or 18 tourists sharing the shop with us while we were in there, and the store is not that big.

Mark ended up buying a watch for me; it is a nice, somewhat dressy watch for work. It is made out of my favorite precious metal, rose gold, and has Swarovski crystals embedded around the rim of the front. 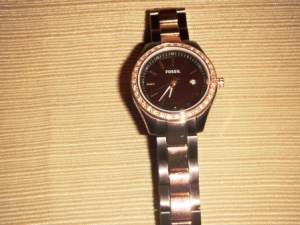 Had the store not been warm, we never would have stayed in it long enough to find the watch, so kudos to the manager at the Fossil Store at City Walk at Universal Studios in Orlando, Florida for extraordinarily smart marketing – with heat!