How FRED killed the Caboose

Whether or not I paid attention anytime else in my life, I did pay attention in Kindergarten and First Grade.  Really, I did.  And in my first classes, we were taught about trains.

Trains are fascinating to me even though I have never ridden a passenger train anywhere. (I don’t think riding the steam train around Disneyland counts.)  There’s something mesmerizing as you watch the giant cars trundle by, each one filled with something different, bound for who-knows-where, and many of the box cars(at least in the U.S.) decorated with spontaneous and colorful pieces of graffiti. 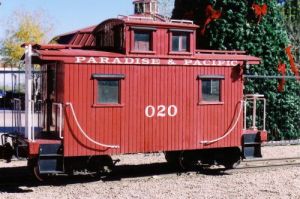 In elementary school, I learned that every train had at least one engine, the cars behind it and a caboose.  The caboose was one of my favorite parts of a train – not only does the word itself have a delightful ring to it, it usually had a unique shape and it was like having a period at the end of the sentence as far as a train was concerned.  Traditionally, the caboose was red, but over time many railroads began to paint the caboose to match their corporate colors.  Still, red or no, it remained the caboose, proudly marking the end of the train.

I can remember when most trains had a caboose.  One day in the 1970’s, some poor engineer in Illinois nearly had a heart attack when a car driven by my grandfather and carrying all three of us girls raced it all the way to a crossing.  By the way the train was wildly blowing its horn, I am sure the engineer thought we were trying to beat it over the tracks, but that was not so – Grandpa, at our request, was just trying to get us enough ahead of the train so that we could watch it go by, and see the caboose at the end.

A strange thing happened though, over time – the caboose gradually disappeared.  Sitting here today, I cannot specifically remember the last time I saw a caboose on a train (unless you count the steam train that travels around Disneyland, which I do not.)

One of the Steam Trains at Disneyland

I was caught at a train crossing yesterday, and watched the train cars flash by until we reached the end of the train – a coal car – and it seemed so unfinished without the caboose car to bring up the end.  I decided to investigate the mystery of the missing caboose, and after copious research (that translates to one google search and reading the entry on Wikipedia), I have discovered the identity of the person who killed the caboose – FRED.

FRED is a device that reads all of the information that used to be gathered in the caboose and transmits it electronically to the front.  FRED also emits a flashing red light to mark the end of the train.  FRED has about as much personality as a blank wall in an unfinished house, yet it managed to kill of the caboose in the name of progress and profits.

I think someone needs to bring charges against FRED, don’t you?  The ghosts of a thousand thousand cabooses (or is that caboosi ?) demand it! 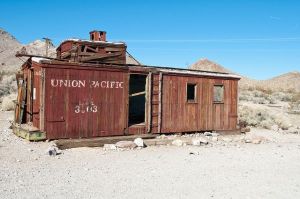 An Abandoned Caboose in the desert

3 responses to “How FRED killed the Caboose”