Yesterday, I showed you what had happened to the connecting road outside our neighborhood on Monday due to the heavy rain. 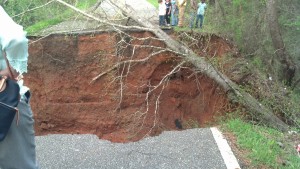 Width and Depth View of Washout

What I didn’t mention was the havoc the heavy rain caused in the school bus pick-up schedule.  School opened at 10 on Monday due to the rain, so when the bus didn’t pick Kayla up, I didn’t think too much about it.  I just figured it got held up by standing water somewhere, although I did think it a little strange when we pulled up to the school and the bus that should have picked her up was also unloading students. 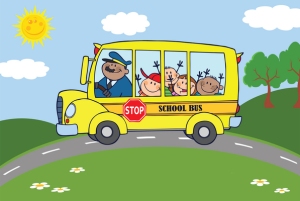 On Tuesday, however, when the bus didn’t show, I told Kayla I would call the transportation office after I finished an appointment I had in a city about an hour away.  Imagine my surprise, then, when I received a call from the Director of Transportation for the school district about an hour later (apparently out of the blue) telling me that he had thought our road was closed for access as well as the road where the culvert was and the bus would be sure to pick Kayla up on Wednesday!

If you have been around offices of any kind, you will know that the person to go to when you want something done is the secretary that has been there the longest.  That person always knows how to go about things.  Apparently my child has figured that out instinctively.

The Person Who Gets Things Done!
Photo Credit: http://www.clickartonline.com

Whether she thought I would forget to call due to my absent-mindedness, or she just happened to have the opportunity to stop by the school office that morning, Kayla told the school secretary – the one that checks people in when they’re late – that the bus had not picked her up for the past two days.   The school secretary called the transportation director, who investigated and called me.

The bus was there five minutes early the next day.  Maybe I should have Kayla handle all of my scheduling issues!