Meet Mr. Belvedere, the latest addition to the growing list of buskeys (and buskey photos) people are kind enough to share with me.  Even better, Mr. Belvedere’s friend, Sara, has one of those rarest of photographs – a picture of a buskey as a puppy!

Sara works at a shelter, and is responsible for temperament testing all of the shelter dogs, so she also had more training than many of us on managing a buskey.   Belvedere sings, howls and talks, and is very smart.  He likes to play a “find-it” game and food games with Sara that use the exceptional sense of smell he received from his basset hound forebears.

Belvedere is the first buskey I have “met” that is not, ummm, shall we say, vertically challenged.  Sara says he looks sort of like a basset hound on stilts, being long, tall and thin, with the loose skin around his neck and the long nose of a basset hound.  He also has the smelling acumen of a basset hound.

He is full of personality, another trait most buskeys share.  In addition to his vocal talents, he likes to play in the sprinkler and in water.  (Something I am not at all sure our Mandy would do – although I have seen her step and then sit in a bowl of ice water that we left on the porch once when we had to leave the dogs outdoors in the summer.  We did that several times that summer, and it took me forever to figure out how they managed to splash the water everywhere while we were gone!).

Mr. Belvedere also gets along very well with the other dogs in the household.  In this picture, he is napping with his brother. 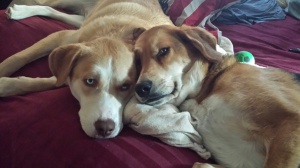 Mr. Belvedere and his brother together Photo Credit: Sara Kyser

Sara had his DNA tested and it came back as 1/2 basset hound and 1/2 husky, with pure bred parents as far back as the DNA people could go.

Sara has noticed, and been working with, a tendency to “resource” guard, which she believes comes from his husky half.  It’s good to know that he does that, because I have often been frustrated watching Mandy take a good 45 minutes to eat the same bowl of dog food that Darwin could scoff down in about 10.  She waits until everyone else (people included) are done eating in the morning before she starts.

Sara also wanted to share the following with anybody intending to intentionally create the buskey mix (or, for that matter, those of us who were just lucky enough to match up with one at a shelter somewhere.)  This is what she wrote:

He can be a bit of a husky with handling, somewhat sensitive. I have worked on this and resource guarding issues from the time he was a pup, and continue to this day. I mention this because I think it’s important for people to understand that both hounds and huskies are known to have resource guarding issues. Huskies are known to be difficult to handle in general. Crossing these two breeds makes for an amazing, funny, intelligent dog but positive training is essential, and they might not be for the first time dog owner.

As you may recall, one of the readily identifiable characteristics of every buskey I have encountered so far is a strong independence streak, which is why the positive training is needed.  We have noticed that streak in Mandy, also.  If you tell her “bad dog” about something, she looks at you thoughtfully, as if to say “that’s an interesting point of view,” then goes ahead and does what she wanted to do originally anyhow.

Mr. Belvedere, however, was lucky enough to find someone who knows how to train him – and I think Sara thinks she was pretty lucky, too!