Goodbye, Mandy – The Post I Didn’t Want to Write

Grief is a funny thing.  Everyone reacts to it differently, and the same person can have different responses to different situations that cause it.  My grief has given me writer’s block for months.

On Sunday, September 8, 2019 around 9:00 p.m. we had to make the difficult decision to have our loving, mischievous, laid back Mandy put to sleep.  I always grieve when any of our dogs die, but Mandy’s death hit harder in some ways because it was unexpected.  She hadn’t been acting or looking sick even that Friday evening when we went to bed.  But when we woke up Saturday morning, she had gotten sick in several spots.  We figured she had gotten hold of something that disagreed with her (remember, she was our scavenger extraordinaire) and went through the dog-with-a-stomach-virus drill – picked up her water, kept her off food for about a half a day and other such things.  We would put the water down periodically, but she wouldn’t drink too much and she showed a total disinterest in any food we put down for her after the half-day.  So we let her rest, hoping the bug would work itself out in the next day.

Sunday she still was sick, still not interested in food and not at all her normal self.  We decided we would make sure she went to the vet Monday morning, but by Sunday night we weren’t sure we could wait, so Mark and I went to the Emergency Vet Clinic in Montgomery.   Kayla had school the next day, so she stayed home with Darwin. 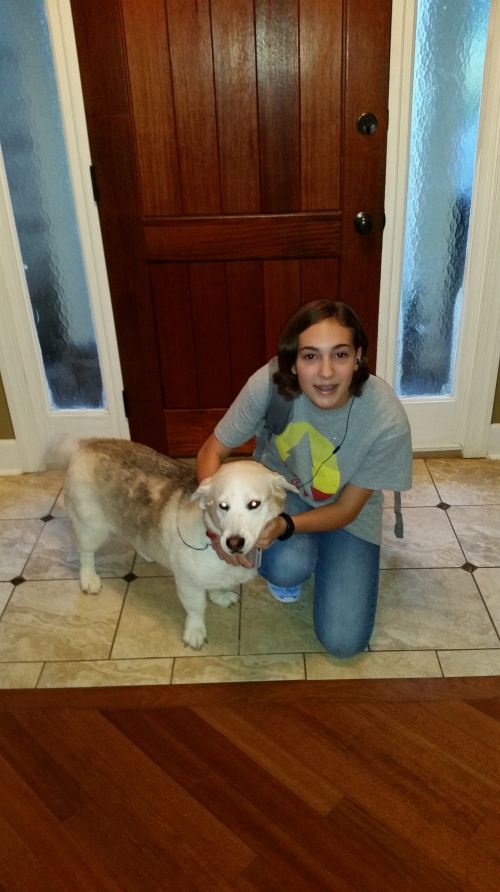 They’ve seen her before (check out the incident of the medicinal sock here) but it took about an hour for them to get us back to a room.  Once we were there, they drew some blood and did an exam and told us to wait.

The last two pictures of Mandy at the vet’s office that night: 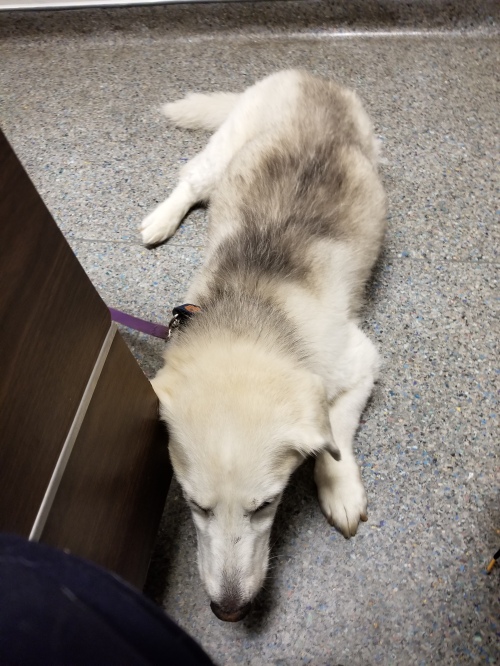 Mandy being Mandy, she didn’t want to wait on the exam table, so I sat on the floor beside her petting her until the vet came back in to talk to us.  The news wasn’t good.  Basically, Mandy’s kidney or liver enzymes were off the charts, which meant she was dying.  There was no treatment; she was just going to get sicker and sicker as time went on.  We could tell she was miserable, so we made the only decision we could.  The vet’s office had a special room where we could stay with Mandy until it was all over with, so Mark and I spent about 20 minutes saying good-bye, and a few more minutes sitting with her while the shots took effect before we said our final good-byes and left.

So now there’ll be one more pet to greet us at the Rainbow Bridge when our time comes.  Heaven will be a lot more fun with Mandy there.

Have a good morning, everyone.

Meet Mr. Belvedere, the latest addition to the growing list of buskeys (and buskey photos) people are kind enough to share with me.  Even better, Mr. Belvedere’s friend, Sara, has one of those rarest of photographs – a picture of a buskey as a puppy!

Sara works at a shelter, and is responsible for temperament testing all of the shelter dogs, so she also had more training than many of us on managing a buskey.   Belvedere sings, howls and talks, and is very smart.  He likes to play a “find-it” game and food games with Sara that use the exceptional sense of smell he received from his basset hound forebears. 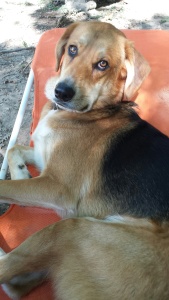 Belvedere is the first buskey I have “met” that is not, ummm, shall we say, vertically challenged.  Sara says he looks sort of like a basset hound on stilts, being long, tall and thin, with the loose skin around his neck and the long nose of a basset hound.  He also has the smelling acumen of a basset hound.

He is full of personality, another trait most buskeys share.  In addition to his vocal talents, he likes to play in the sprinkler and in water.  (Something I am not at all sure our Mandy would do – although I have seen her step and then sit in a bowl of ice water that we left on the porch once when we had to leave the dogs outdoors in the summer.  We did that several times that summer, and it took me forever to figure out how they managed to splash the water everywhere while we were gone!).

Mr. Belvedere also gets along very well with the other dogs in the household.  In this picture, he is napping with his brother.

Mr. Belvedere and his brother together Photo Credit: Sara Kyser

Sara had his DNA tested and it came back as 1/2 basset hound and 1/2 husky, with pure bred parents as far back as the DNA people could go.

Sara has noticed, and been working with, a tendency to “resource” guard, which she believes comes from his husky half.  It’s good to know that he does that, because I have often been frustrated watching Mandy take a good 45 minutes to eat the same bowl of dog food that Darwin could scoff down in about 10.  She waits until everyone else (people included) are done eating in the morning before she starts.

Sara also wanted to share the following with anybody intending to intentionally create the buskey mix (or, for that matter, those of us who were just lucky enough to match up with one at a shelter somewhere.)  This is what she wrote:

He can be a bit of a husky with handling, somewhat sensitive. I have worked on this and resource guarding issues from the time he was a pup, and continue to this day. I mention this because I think it’s important for people to understand that both hounds and huskies are known to have resource guarding issues. Huskies are known to be difficult to handle in general. Crossing these two breeds makes for an amazing, funny, intelligent dog but positive training is essential, and they might not be for the first time dog owner.

As you may recall, one of the readily identifiable characteristics of every buskey I have encountered so far is a strong independence streak, which is why the positive training is needed.  We have noticed that streak in Mandy, also.  If you tell her “bad dog” about something, she looks at you thoughtfully, as if to say “that’s an interesting point of view,” then goes ahead and does what she wanted to do originally anyhow.

Mr. Belvedere, however, was lucky enough to find someone who knows how to train him – and I think Sara thinks she was pretty lucky, too!

In August, 2011, I wrote a post about Mandy, our husky basset hound mix.  Since that date, that post has been visited over 4000 times!  People have been kind enough to tell me sometimes why they wanted to read it – most of the time, someone has either just adopted a puppy or dog who is a buskey.  (For those new to the blog, “buskey” is the name I’ve decided to use to call this most unusual, but beautiful mix.)

I’d like to introduce you to a new member of the buskey family:  Stella.  As you can see, she bears a striking resemblance to other buskeys, as most of them do. 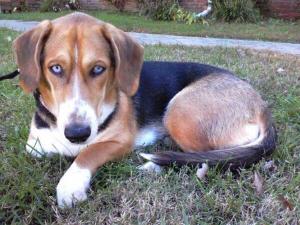 Stella, photo from Amelia, her mom

Stella has the body shape and the striking blue eyes common to the buskey, and you can see that her tail has longer hair on it than a hound’s tail would.  Her coloring is interesting, since she appeared to pick up more of the basset hound brown then some of the other buskeys we have seen.

Stella enjoying a car ride.
Photo from her Mom, Amelia.

Here’s a picture of our Mandy enjoying a ride in our motor home.  You can definitely see the resemblance!

Just like all the other buskeys, Stella has a laid back temperament, a generally sunny disposition, and a marked aptitude for foraging/scavenging kitchen counters and any other surfaces which may have food lying around loose.

Stella as a Puppy – Photo from Amelia, her mom

We are fortunate in that Ms. Amelia was able to send us a rare photo of a buskey as a puppy.  A lot of the people who now have buskeys adopted them from shelters as rescues (including us) and never had the opportunity to see our buskeys as puppies. 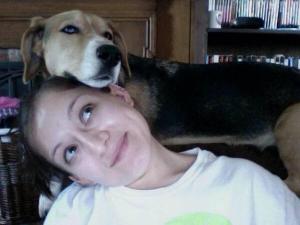 Stella and one of her people puppies; Photo from Amelia, her mom

This pose looks familiar to me – it is one of the poses Mandy uses when she has decided to get me up in the morning.  It’s usually a warning shot before she starts to walk across my hair, which always gets me up.  (It hurts!)

While we are always happy to meet new buskeys, it’s nice to hear from some of the others we have already met.  Sawyer’s owner, who was the first buskey owner to ever contact me. recently sent me some updated photos.  Believe it or not, Sawyer is now 8!  That hardly seems possible. 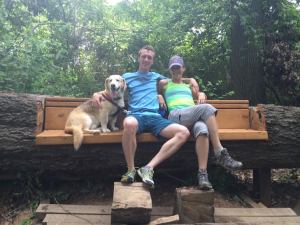 Sawyer at age 8 with his family. Photo from Neda, his mom.

He looks happy, doesn’t he?  Here he is on the front steps of their home:

Sawyer in the front yard: Photo from Neda, his mom.

Sawyer’s resemblance to Mandy can be almost uncanny – since he originally was adopted from a shelter in Birmingham, both families have speculated as to whether they might be related – but that, alas, is something neither of us will ever know for sure! 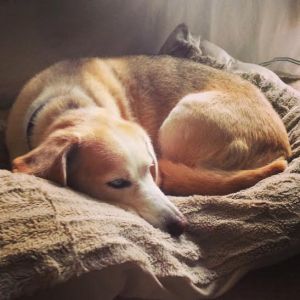 Compare that picture of Sawyer with this one of Mandy sharing her bed with Tyra, and you’ll see what I mean about the resemblance. 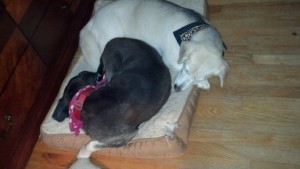 Tyra and Mandy Sharing a Bed

If any of you other buskey owners out there who have or will visit here to find out more about these unusual dogs want to share pictures, I’ll be happy to share them!