When Mark and I first married, we lived in North Carolina for three years.  While most of that time was spent in a small town called Rockingham, North Carolina, we did have the opportunity to live for at least a few months in Charlotte, North Carolina.  Even back then, in the late 80’s, Charlotte was a beautiful city.  It ended up being one of the places we enjoyed living in most out of everywhere we’ve been.  We had a chance a few weeks ago to go back to Charlotte for the first time, and we took Kayla with us.  While we were driving through downtown Charlotte, Kayla took the following pictures, which I think (proud mama alert!) are quite extraordinary for a 12-year-old armed with only an iPod. 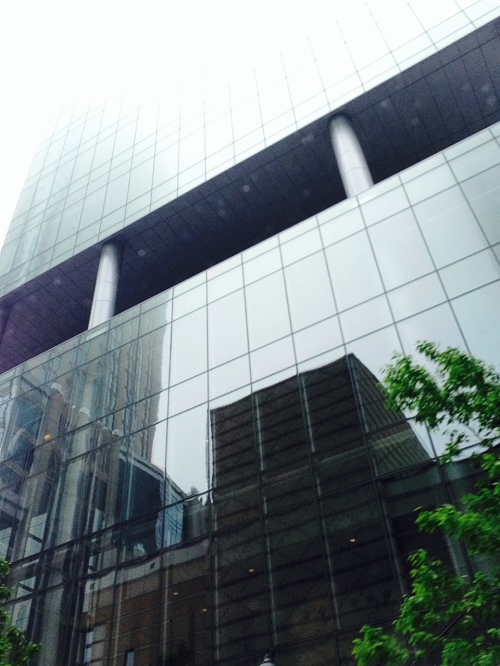 This one is probably my very favorite of all of the pictures that she took.  One of the unique features of Charlotte is the quantity of trees the city, even the downtown, still has.  Early on in its urban development, Charlotte’s city fathers passed ordinances requiring trees to be kept intact whenever possible.

Charlotte got its start as a town in the first gold rush that ever occurred in the United States – gold was found in Charlotte in the early 1800’s. Now the city is a financial services mecca, headquarters to many different banks and other financial institutions.

We were riding through on a misty morning, and the tops of the skyscrapers were hidden in the clouds, a fact that fascinated Kayla.

I, of course, hardly recognized anything downtown from when we lived here over twenty years ago, and yet I still recognized the spirit of the city.  The city that can maintain the balance between old and new and still retain its original identity is a rare city indeed.  But then, that’s Charlotte!

It’s good to be back!  For any of those kind enough to notice that I haven’t posted for about five days, we are back from a family trip to Charlotte, North Carolina.  Since I worked the whole time (ain’t modern communications grand?) I can’t really call it a family vacation, but we still had fun and Kayla and Mark got some well deserved “Daddy-daughter” time.  I even learned something about myself – I may be overly concerned with being considerate to others.

I have a program on my work computer called WordRake.  It highlights words and phrases it thinks can be deleted from whatever draft I turn it loose on.  It is a great tool for my work in legal writing and entertaining, too.

I am particularly amused when the parts of my work briefs that WordRake lights up like New York on a dark winter’s night are quotes from appellate cases.  (Hey, we all get our kicks somewhere!)  I also enjoy arguing with it about its editing selections.

Our relationship reminds of the first trip I ever used a GPS – it was in a rental car on a trip to Boston.  My mom (who grew up there) was visiting as well.  She loved to ride with me and to program the GPS so she could tell me that it was wrong and direct me to go a different way, thereby giving the GPS a heart attack.  At one trip, it got so frustrated it stopped giving directions and simply churned through “recalculating” for about five minutes!

Last night, I was using WordRake on a work draft, and I caught myself agreeing to some edits that I wouldn’t have done on my own because I didn’t want to hurt its feelings by ignoring it too much.