Kayla was talking to me this morning about seeing three doe on the side of the road the other evening grazing, which reminded me about Kayla’s traumatic deer incident.

Not many children carry a fear of deer, I realize, but I can trace this particular fear, which has only recently resolved, to a house-hunting expedition when she was almost five.  We were in a small town looking at houses, when we walked into one split-level ranch-style home with two bedrooms in what most people would think of as a basement area.

In one bedroom, someone apparently had thought it would be funny to take a deer head that was mounted to hang on a wall and instead tuck it neatly into a bed in the room.

That someone was not parent to an almost five-year old named Kayla.  She entered the room, and started to tremble all over.  Once we finally figured out what she was scared of, we scooted her out of there in a hurry, only to be told by her that she was certain that she saw the deer wink at her, and she could see its hooves in the bed peeking out at her!

Have you ever tried to reason with a four-year old?  I don’t recommend it, unless it is on a critical, concrete safety issue such as not playing with the stove or electrical plugs.  Apparently, a four-year old can understand avoidance of pain, but not logic with respect to the fact that mounted deer heads are not alive and do not have legs.

Ever since that day, any house hunting expedition or discussion of buying a house is prefaced by her trembling query, “But not the deer house, Mama.  Right?”

I personally am not nearly as afraid of mounted deer heads as I am of the kamikaze squirrels that live along the roads that lead to our house.  I do not know what possesses these squirrels, but they run across the road recklessly regardless of approaching  vehicles.  Usually, in the spring time, you have one or two young squirrels that unfortunately are not smart enough to realize that running across the road, especially immediately in front of approaching cars,  is generally not good for a squirrel’s health,  but this spring, in our town, I have seen very large, healthy older squirrels skittle across the road without the slightest hesitation while I hit the brakes with all my might, steer to the side, swing my right arm out across Kayla’s chest as if my arm can protect her if neither the seat belt nor the air bag do, and pray that I miss the squirrel as well as the hill  on my side of the road.  The squirrels may not be suffering any anxiety from their lifestyle, but it’s about to give me nightmares! 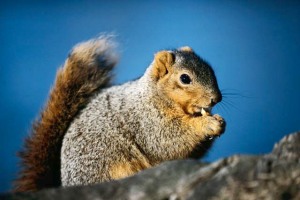 A Squirrel Posted On Surveillance

All of which makes me wonder if, instead of simply comfortable but slightly stupid squirrels, my neighborhood is populated by evil squirrels hatching a sinister plot to take over the neighborhood through forcing every vehicle in it to wreck, thereby requiring the residents of the Sherwood Forest neighborhood (no lie, that is my neighborhood’s name) to have to walk everywhere. And after our neighborhood, what lies next for the squirrels?  The town, the county, the state, the country and then the world!   This theory is bolstered by the (out of neighborhood/out of county) squirrel that lies in wait for Mark on his way to work every day, ready to scurry across the road immediately in front of his car as soon as the squirrel sees it.

Posted in Just stuff..., On the Home Front, working mom 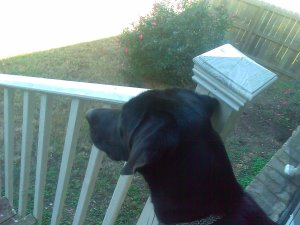 Darwin found his mind this morning, which was a relief.  There is some debate between the three of us as to whether he found it for a little bit last night, too, but the consensus vote (2 to 0, with Kayla abstaining) is that he was just tired.  What caused him to find his mind?  Two deer at the end of the court. 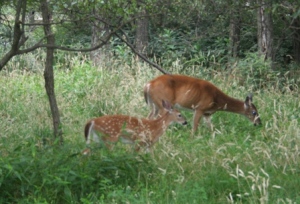 These are not our deer, but they look very similar! Our fawn was not spotted.

We let the dogs out every morning and let them back in once the barking gets to the point we can’t stand it any more.  Today they were particularly vocal, so Mark looked out the door while he was letting them in.  There was a small baby buck standing at the edge of the woods at the court that our house overlooks.  Of course, once the buck heard our dogs barking, he instantly froze, which only made them bark more.  We got the dogs in, and Mark and I watched from inside the house, while Kayla went outside to watch.  As soon as they were inside, he started to move, but he kept looking back at the water.  I wondered if another dog was barking somewhere, but the answer was much more natural than that – his mother came from the lake up to him, led him caty-corner across the court, and then took him back into the woods.  Now, how do I know that this caused Darwin to find his mind?  Ever since then, he has periodically stopped at the back door, looking out to see if he can still see the deer.  Ergo, Darwin’s mind has made at least a brief reappearance!  I am pleased to know the deer are still with us; these are the first we have seen for a couple of years from our house. 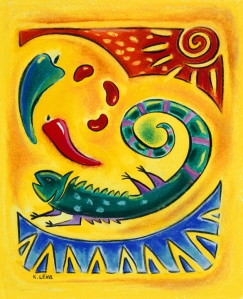 I went to pick Kayla up from dance yesterday (it was the first lesson of the year), and was greeted by a crowd of people leaving the studio.  Kayla’s friend, Rebecca, rushed up to me and said, “Your daughter caught a lizard and she still has it!”  I said hello to Rebecca and her mother, but ignored the lizard comment since I knew my daughter knew better than to try to bring a lizard home with her.

She greeted me at the door of the studio with something wrapped in a small piece of paper and told me that she had caught a lizard and the dance teacher had told her she could keep it.  I told her there was no way a lizard was coming into the house, and made her let it go.  It was such a small lizard that at first I thought it was a cricket, but a baby black lizard it was.  She wasn’t too happy about it, but I told her that I didn’t “do” lizards, and only allowed certain mammals as a pet.  (Sorry, Stella!  I know you love your iguana Zorro.)

Kayla told me that the lizard was a mammal, but even she knew that wasn’t right.  I reminded her that it was a reptile.  She thought for a moment, then said, “Well, I’ll cover it in fur and then it will be a mammal!”  Between you and me, I think the lizard is better off in the wild.

FN.  My friend, Stella DeLeuze, owns an iguana whom she has named Zorro.  She writes a blog which contains interesting writing tips as well as stories about her trials and tribulations with Zorro.  If you are interested, look up her site at http://wordsbystelladeleuze.blogspot.com