And now the score is tied.  Touché!

Have a great weekend everyone.

Posted in Just stuff..., Out of the mouths of babes...., Parenting

I had to have some blood drawn for a test the other day, and so the doctor sent me over to a lab facility connected with the hospital.  When you entered the waiting room there, you went to the receptionist window at the far end of the waiting room, signed in your name and time, and you were given a number.

Since I arrived at 4:15 on a slow day, I duly received my number and sat down – to an entirely empty waiting room.  I waited for a few minutes, and the door to the lab offices opened and the tech stepped out.  Looking around the empty waiting room, she saw me.  She then looked away from me, and called out into the empty room “#79?” 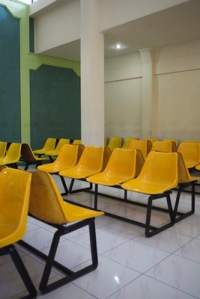 I couldn’t help it – I thought it was funny.

Weightwatchers as Kayla sees it

Thursday night is not as busy for us as Wednesday night, but it still is busy, since Thursday night is when I go to Weightwatchers.  The meeting is at 6, so I have just enough time to get Kayla from day care and arrive at the meeting just a little early so I can get weighed in.  Kayla attends the  meetings with me out of necessity, and I am very proud of how well behaved she is during them.  In fact, she has been quite a hit with the group, and the leader will ask her to help hand out items and do other little things which make her feel included.  Her favorite part is when she gets to weigh in (for free).  She listens to the leader too; the suggestion a couple of weeks ago was to compare your level of hunger to traffic lights – green means you’re hungry, yellow means you’re getting close to satisfied, and red means you’re way too full.  About a week later, we were eating dinner, and out of the blue, Kayla looked up at me and said, “Mom, I’m at yellow.”

Last night, Kayla had been playing outside at day care when I picked her up, and her first, second (and next 100) comments involved the fact that she was thirsty and wanted a drink.  I had nothing in the car with me, and not being gifted with the ability to manufacture something out of nothing, I told her when we got to the meeting place, she could get a drink at a water fountain.  Unfortunately, we didn’t see a water fountain anywhere on our way in, either.   So she spent the entire meeting whispering to me “I’m thirsty.”  When we got outside after the meeting, she looked at me and said, again, “I’m thirsty.”  I stopped, looked at her in amazement and said, “You’re thirsty?  I never would have guessed!  What on earth would have made me think that you were thirsty?”  She looked at me and said, “Daaadddyy!” in the tone of voice she uses when she knows she is being teased and wants you to stop.  I pointed out that I was Mama, not Daddy, since I was the one with dark hair and brown eyes, not light hair and blue eyes, and that it probably was time for her to be able to tell the difference between us.  She started to laugh and then she said, “It’s just that I love both of you  so much that I have a hard time telling you apart!” and then she gave me that  little grin that says she is seeing how I will take it.  I looked at her and said, “I don’t believe that, but I give you credit for quick thinking!” and she laughed again as we drove home.

She has been very disappointed that there are no free samples of anything given out at the meetings that we have attended so far – at Weightwatchers’ meeting, there are boxes of different snack bars and other items on the weigh-in table that you can buy if you want, and she has just been certain that somewhere along the line free samples will be forthcoming.  Yesterday was her magic day – we got to try some cracker/chips that were 3 points for 30 that the leader had found at the store.  They were pretty good.  The only problem was that they were seasoned with sea salt and the sea salt obviously did not help with the thirst.

Today is “B-day” in our household – the day that Kayla’s braces get put on.  Mark is going to take her this afternoon to the appointment.  She is already very nervous about it.  Please say a little prayer for her.

Have a great Friday everyone!

Posted in Out of the mouths of babes....