I enjoyed writing today’s post so much that I am going to start a weekly article on Yahoo Contributor going over the basic rules of American football for beginners.  Here is the link to the introductory article:

(If you read it, you will see that it bears a very strong resemblance to my post this morning, but the other columns won’t.)

Please forward this link to everyone you know of who is, or would like to be, an NFL football fan!

Thank all of you very much for your help with this! 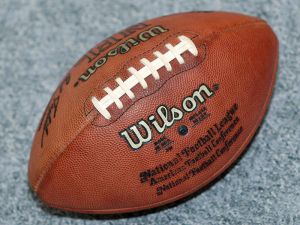 Last night was a big evening at our household – the first televised pro football game of the 2011-2012 pre-season popped up on ESPN.  All three of us love watching football; Kayla more out of self-defense than anything else, since she has learned that if a live NFL football game is on, we will be watching it.  Mark is a serious student of the game, but I am much more of a dilettante. 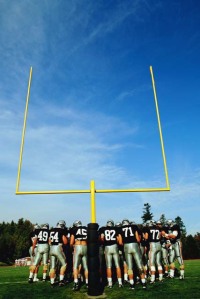 I know basic aspects of the game, such as the fact that the object of the game is to take the oblong shaped ball down the field to cross your opponent’s goal line, that a touchdown is worth 6 points, a point after kick is worth 1 and that you can, if you choose, to “go for two” after the touch down instead.  A lot of the finer rules escape me.  For example, I know it is a bad thing if anyone moves (besides the one special dude who always gets to run the width of the field) before the ball is snapped, but I continually get lost between false start and encroachment.  The difference is whether the defense or the offence does it, but I do have a hard time keeping it straight. 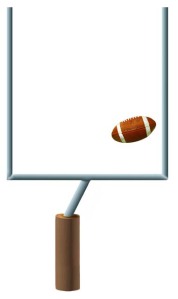 I know the names of certain positions, but not all.  For example, I know what a quarterback, center, running back and wide receiver do, but I really couldn’t tell you the difference between a nose guard and a tackle (although I should be able to).  I get a little confused about the tight end, because he seems to be sort of a running back, receiver and member of the offensive line, all rolled into one.  I also know the names of certain players, heavily weighted towards those players who played for Auburn University or in the SEC, including Jason Campbell, Takeo Spikes, Heath Evans, Peyton and Eli Manning, Carnell Williams, Ronnie Brown, Sean Alexander and a host of others, and I am eagerly awaiting the debut of Cam Newton, Nick Fairley and Lee Ziemba onto the NFL stage. 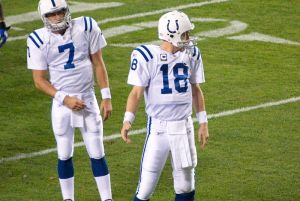 There are certain key points of the game that are hard to miss.  In particular, I think that a good offensive line is probably even more important overall than a star quarterback, running back, wide receiver – none of the last three can do what they need to do if the offensive line isn’t in the trenches slugging it out for them.  I think the star quarterback, running back and wide receiver would agree with me.  The same is true also of the defensive line.  You can predict the winner of a game by whichever of the two lines wins the battle in the trenches. 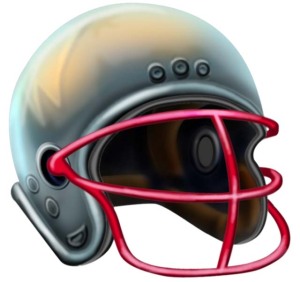 I have decided this year to learn a little bit more about this game that I love to watch.  My goal for this season is to learn the names of each position on the field and what they do.  Unfortunately, last night I didn’t make this decision until I was into my third game of BeJeweled on the iPad, so I lost the opportunity to learn anything beyond the fact that the ESPN announcers felt that the lack of a full length training camp was very, very bad for the rookies.  They referred several times due to the fact that they believed that this rookie class would be the “lost rookie class of 2011.”  The rookies didn’t look particularly lost to me; it seemed that they had found the stadium and locker rooms just fine!