I’m Just Not Getting It…

Professor Greenberg and I are winding towards the end of our exploration of the    Concerto, which means that we have entered the weird world of “classical” music for the 20th century.  I am trying really hard, but I’m just not getting how the cacophony of sounds I am listening to  are supposed to morph together to make the music something that I either enjoy hearing or something that I should understand intellectually.

We listened to Russian composers of the 20th century the other day.  The details of some of their lives are fascinating, from the sad Prokofiev, who decided to return to Soviet Russia under Stalin from the West, only to have his music condemned in 1948 and die a broken, frightened man five years later, (are any of us really surprised that move didn’t work out?) to the defiant Shostakovich, who managed to get his message out in spite of Stalin and his condemnation (although in Shostakovich’s case, timing was everything – he lived until the 1970’s, and so was able to publish a great deal of his work in post-Stalin Soviet Russia.)

Music that did not meet the Soviet “ideal” was the type of music that Soviet Russia condemned and banned from performance.  Soviet Russia proclaimed that “good” Soviet music should be accessible, be based on Russian folk music and not contain elements found only in the “decadent” West.  The failure to meet this “ideal” led to the condemnation of works by Shostakovich, Prokofiev and several other leading composers of their day in 1948.

But this is my problem – I can’t tell a difference much between the cacophony of “approved” Soviet music and the dissonances of freely expressive compositions, although one set is dismissed as music written by hacks, and the other set as the work of geniuses.  (I did like Prokofiev’s Peter and the Wolf, but that was written for children and I last heard it when I was about 12.  It was outside the scope of this lecture series.)

I am dutifully listening to compositions based on something called the “twelve-tone” method, and not getting them, either.  Professor Greenberg will inform me that something is very lyrical, haunting and beautiful, but I don’t hear it.

I don’t necessarily think this is due to a lack of effort on my part.  Anyone who spends at least four days puzzling out the lyrics to TTYLXOX by Bella Thorne is certainly willing to put the effort into understanding more serious music.  I just am not getting it. 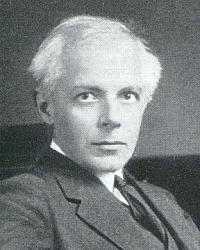 There is one exception – Bela Bartok’s music.  While I would not plop in a CD of Bartok’s compositions for fun listening riding down the road, I do hear the beauty in his work.  Bela Bartok’s music, though, was based on the folk music of Eastern Europe and the harmonies and dissonances contained therein, filtered through sound, Western compositional techniques and a dash (or more than a dash) of genius.  In other words, he was not consciously trying to combine pitches in ways that no-one had ever heard before, but simply expressing himself.

For myself, while I am open to new sounds and, as I said, am trying to understand them, I think I will stick with the baroque (ie., Bach, Vivaldi, Telemann), the classical (ie., Mozart and Beethoven) and the Romantic (ie., Beethoven, Mendelssohn, Brahms) when I am selecting music to listen to for my own enjoyment.

What kinds of music are you interested in?  Do any of you like (or understand) music from Prokofiev forward?  Can you help me understand it?  Will I make it through the last three CD’s of the lectures on the Concerto?

Tune in next week, same time, same channel, to find out!