The Gulf Coast Beaches: Beautiful and Ready for Visitors!

We recently had the chance to spend a weekend in Perdido, one of the beach towns that run along the Gulf of Mexico from Orange Beach, Alabama through Pensacola, Florida and on through Panama City, Florida.

Mark letting me take a picture of him while driving

Kayla in the car

We left for the beach Friday after work, having left the dogs at their kennel/day care known as Cutie Patootie Dog Boutique.  It is, quite frankly, the only kennel the dogs have ever enjoyed (as opposed to endured), although they are always glad to come home.  I think it’s because they get to play with the other dogs that are there, which means Tyra gets a break from everyone, Darwin can play to his heart’s content, and Mandy only has to play with someone when she feels like.
It took us about 3 hours to get to the condo we were staying at (I rented it from an acquaintance).  The condo was well-appointed and comfortable.  Kayla was particularly fascinated with the narrow metal spiral staircase that led up to the loft. 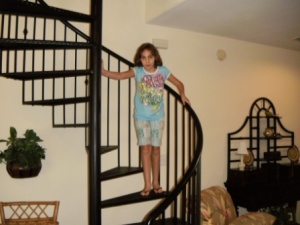 Kayla on the spiral staircase

She wanted (or at least pretended like she wanted) to try jumping off the top step, but both Mark and I quickly nixed that idea.

Perdido is only 8 miles from Orange Beach and Gulf Shores to the west, and only about 15 miles from the heart of Pensacola, although from where we stayed it was only 8 miles to the Naval Aviation Museum, which is high upon our list of things we want to do when we go back.

Some of you may remember from last spring and summer that this area was affected by the BP oil spill.  If fear of oil or tar balls on the beaches along the Gulf is keeping you away, let me show you what the beach we were playing at (one of the Perdido State Park beaches in Florida) looked like:

Headed out to set up camp

This view shows our own little “beach camp” that we staked out for the day:

Here’s a view from the beach towards the water.  The dark stuff is dried sea weed. 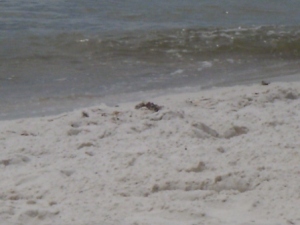 View toward the water

Interestingly enough, we did see some BP personnel drive by behind us while we were there.  There were about eight people with two trucks between them, each with a mounted trash can on the back.  They sat in the truck for about 20 minutes, then eventually two of them sauntered down to the waterfront, walked around for a few minutes, then walked back.  I couldn’t help but think that what BP really needs to be doing at this point is figuring out how to get the tons and tons of oil that settled onto the Gulf of Mexico seabed cleaned up instead of patrolling beaches, but BP didn’t ask my opinion, either.

Mark and Kayla played with the football while I watched, which is always fun to see.  Kayla can throw and catch, but it takes her a little while to warm up and stop being afraid of the ball before she catches it.  Here are some pictures of her while playing football with Mark:

Deciding whether to throw or kick

Of course, the most obvious reason you go to the beach is to play in the water. Mark and Kayla played longer than I did, but I went in a couple of times too.  The water was cold, but not frigid.  What’s the difference?  Cold is where you go in and after a while it doesn’t bother you too badly; frigid is when you go in the water and everything just turns numb.  Frigid is usually experienced only by parents who have children, who seem to be immune from any water temperature from cold to frigid and who assure them, “Really, it’s not too bad!” or Canadians, who seem to be used to it, or Californians, because the water almost always seems to be frigid off the coast of California unless it is an El Nino year (I lived in the San Diego area when I was a child).  I knew how much my husband loved my daughter when he spent an hour in the water with her one day with the water temperature at frigid.  Mark does not like cold – at all!

Headed out to play and swim

Caught by a wave 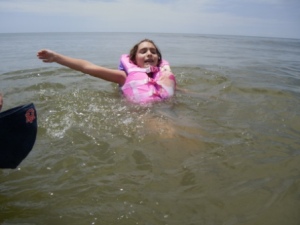 Trying the Back Stroke

Getting ready for the next wave!

We got there about 11, and it was almost 3 when we left.  Even though Kayla told us it was “across the law” (she meant “against the law”) to leave, she had reached the point where she was shivering and needed to rest, not to mention her parents!

We had sat down once between the two rounds of playing in the waves, and while we were sitting there, we saw one pelican dive for fish several times, and three dolphin go wandering by, probably investigating the same school of fish the pelican was interested in.  That had all three of us excited!

Tune in tomorrow when I attempt to explain about Lambert’s and throwed rolls (an experience not to be missed!)  Have a great day everyone!

This entry was posted in Out of the mouths of babes...., Travel, working mom and tagged beach, daughter, Gulf of Mexico beach, humor, parenting, travel, working mom. Bookmark the permalink.

4 responses to “The Gulf Coast Beaches: Beautiful and Ready for Visitors!”