I had a strange malady hit me yesterday – I lost my sense of humor!  After searching for it diligently for the last 24 hours, I have finally recovered it so I am cleared to write.

Front of Lambert's Cafe in Foley, Alabama; courtesy of infrogmation of New Orleans

When we were at Perdido the other weekend, we made time to take Kayla to eat at Lambert’s Cafe in Foley, Alabama.  Lambert’s was first established in 1942 in Missouri, and eventually expanded to include another Missouri location and the Foley location.  The same family still owns and operates all three Lambert’s.  Eating at Lambert’s in Foley is unlike eating anywhere else (except, I suppose, the two Lambert’s in Missouri.)

(All the pictures from here below are copied from the Lambert’s Cafe web site and reposted here with permission; my camera picked this optimum camera opportunity to run out of battery.)

The Inside of Lambert's

Lambert’s signature food/event is the throwed rolls.  In fact, their website even reflects it at www.throwedrolls.com.  Whenever you eat there, they bring out pans and pans of yeast rolls that are over 5 inches in diameter, and if you want one, they throw it to you. 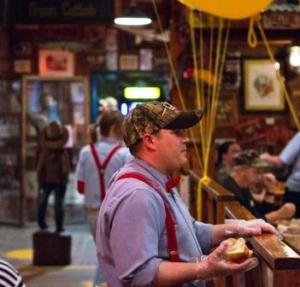 Getting ready to throw

Kayla did not believe us when we told her that the wait staff  throws rolls to the customers, and once she caught the first one thrown at her, her face had a bemused “I’m not in Kansas anymore” look.
Our seating was ideal for Kayla to truly experience Lambert’s for the first time.  (Many Alabamians and people from other states that come to Alabama’s Gulf Coast will tell you that a trip to Lambert’s is obligatory once you are in the area.)  We sat along a hallway that connects two bigger main rooms with her facing the entrance to the restaurant, so that all of the Lambert’s staffers bringing pass-arounds could see her first.

One of the many things that Lambert’s does differently is that, in addition to the meal that you order, “pass-arounds” are brought by your table.  That is, the waiters will carry around pots of various items, like cabbage, black-eyed peas, apple butter and fried potatoes and onions, and offer you portions of them in addition to your main meal.  Kayla didn’t know quite what to think the first time someone came around and offered her some of whatever was in it.  She was both a little startled, and a little impressed, as she started to realize the sheer amount of food that was available to her.

A waiter offering a pass-around

Our waiter, a friendly young man, came to take our order, and then came back with a pot, offering Kayla a pass-around of something like fried apples, I think.  She opened the pot to look at it, and a toy stuffed ferret jumped out of it, kind of like a jack-in-the-box.  She gave a startled little scream, Mark and I couldn’t help laughing, and from that moment she never lost track of where our waiter was when he was in eyesight.  She was going to be sure she didn’t get fooled again! 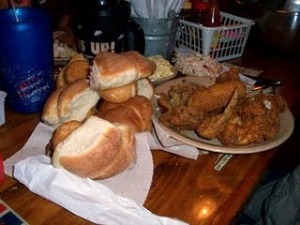 It is even more remarkable that Lambert’s can give you this quantity of food while keeping up the quality of food as well.

Our waiter tried a couple of other tricks on us while we ate – he brought by a pitcher that he said was for a refill, then dropped it sideways like he spilled it, but it turned out it was a fake pitcher.  Kayla thought long and hard about that one, but was reconciled enough with it to enjoy it when he tried to play the same trick on another table.

In spite of our most valiant efforts, we could not eat everything in front of us, so finally we gave up and asked for the check.  Even Kayla, who is about to experience a growth spurt and therefore is eating everything in sight finally had to cry uncle.  The waiter brought the check by with a closed box labeled “Fresh Mints” and tried to get Kayla to open it.  She absolutely refused, since her trust in the waiter as far as closed boxes goes had been entirely shattered, so he left the box on the table.  Mark and I couldn’t stand it, so we opened the box gingerly to see what would come out of it – it was a toy mouse on a spring.  Kayla edged away from the box slowly, like she thought the mouse would come to life but Mark and I just kept laughing.