Today, we are going to explore the mysteries of new math, as discovered by Kayla and me.

About three months ago, someone (we don’t know if it was Mark, Kayla or me, since each of us refuses to claim responsibility) grabbed a large container of individual chip bags at the grocery store.  This is not unusual for us, as the chips make great snacks to send to school – the teachers have sent home notes requiring the students’ snacks to be dry snacks, and you can’t really get much drier than chips.  What was unusual, however, is that whoever grabbed the bag didn’t grab a bag of traditional flavors, but by mistake picked up “Bold, Spicy Flavors”.  Kayla doesn’t like any flavors contained in the “Bold, Spicy Bag” and neither do Mark or I, so it has taken a long time for us to work our way through that set of chip bags, expecially since someone – no names, but her initials are M-O-M – took pity on Kayla  and has supplemented the Bold and Spicy pack with regular flavored chip bags all school year.

Recently, though, the bold and spicy chip bags started disappearing, fast – so fast that the only bag of chips left in the house Monday was “Hot Spicy Nacho Doritos.”  I mentioned this to Kayla, explaining that the Hot Spicy Nacho  flavor was all we had.

Kayla said, “That’s okay. I trade them with my friends.”  When I asked how and for what, she told me that she traded three bags of bold and spicy chips of various kinds for one bag of dill pickle chips.  So, in the local elementary school’s fourth grade barter system,  three bags of chips do equal one.

I walked into Pizza Hut Tuesday with some trepidation.  In fact, I made sure before I left work for lunch  that someone would be manning the phones in case I ended up somewhere where one phone call is a constitutional right.  The reason?
I ate at Pizza Hut Monday, also, and had the buffet.  I took my computer in with me and did some work on a project.  Even after I finished eating, I concentrated on my project, comfortably tucked in my booth.  Of course, eventually, I had to go back to work, so I scooped up my computer and headed to the car. 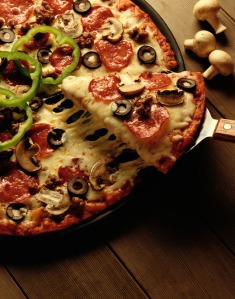 It wasn’t until Tuesday morning at 10 that I realized that I had left Pizza Hut on Monday without paying for my meal.  I had no choice but to go back to Pizza Hut on Tuesday to pay for Monday’s meal, even though I wasn’t at all sure how understanding they were going to be about my lapse of memory.  (It’s almost as bad as the time I paid for my meal at Zaxby’s, got my drink, and drove off without my food, except that day it only took me one block to realize what I had forgotten.)  For time reasons, since I had to go to Pizza Hut anyhow, I was going to have to eat there again, and the buffet is the best deal they have.

When I entered Pizza Hut, I was relieved to see that a different waitress was there, so I wasn’t immediately identified when I walked through the door.  I also took a deep breath of relief when I saw that the police were not waiting for me.  I put my computer in the booth I was sent to, sidled over to the cash register and shamefacedly explained that even though I was only having one buffet that day, I was going to have to pay for two.  The cashier was gracious; she said with a smile, “I saw you leave yesterday, but I just figured you were in a hurry to get somewhere.”  I, on the other hand, have rarely been so embarrassed in my life.

It goes without saying that I paid for Tuesday’s buffet in advance.

So now you know how I discovered that 1 equals 2.