A Stranger at a Strange Sport: In Which I Become Soccer Mom 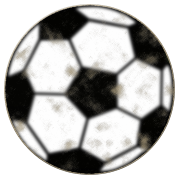 Our town’s Parks and Recreation Department supports a Fall soccer league.  Since Kayla has wanted to try soccer (football to those of you in parts outside of the United States) for years, and since this is the first year I have been able to arrange for her to make practices and games, I agreed to let her play.

For someone who is attuned to the rhythms and rules of (American) football, the transition to soccer has not been easy.  I strongly suspect that I am not the only parent with a child in the league for the first time; at the first game, all of the parents sat fairly silent in their lawn chairs, almost like they were politely watching a tennis match.  I know what my problem was:  I didn’t know how to cheer or what positive encouragements to shout.

Don’t misunderstand me; I have the general idea that in soccer, the goal of one team is to kick the black and white ball into the soccer goal defended by the other team, but the rules are fairly foreign to me.  For example, during the second game (in which Kayla was assigned to play left forward), I kept yelling for Kayla to help defend her team’s goal, only to find out later from Kayla that a forward wasn’t allowed to go that far back.

Another mystery is exactly why the referee decides to blow his whistle sometimes, and not other times.  I understand the out-of-bounds call (although there are times when I don’t understand why he gave the ball to one particular team over another – I would have sworn the last person to touch the ball was on the team that got to throw it in), and the fact that the whistle will blow if one of the players touches the ball with their hands, except for the goalie.  But there are other times when the whistle blows for no discernible reason.

At one such whistle blow, a helpful parent explained to me that the penalty was “off-sides.”  When I asked what “off-sides” in soccer meant, she told me that the offense was not allowed to dribble the ball down the field to the defensive goal without the defense having a chance to catch up.  At least, that’s what I thought she said, but I may have completely misunderstood.  It seems a little unfair that the offense would have to wait for the defense to catch up before scoring; isn’t that why the goalie is there?

As far as penalty kicks are concerned, I am hopelessly confused.  I have seen the kids make several fine “run-in” tackles (where they run into each other) without a single whistle blow, and then other times when, to my inexperienced eyes, it looks like nothing wrong has happened, but  a whistle blows and a penalty kick is awarded (usually to the other team – or maybe my observations are a bit biased?)

I have figured out the names of most of the kids on the team and have learned several decent ways of cheering – simple statements like “Good kick, _____” “Great hustle, ____!”, “Kayla, attack the ball!”, “Come on Green, let’s get the ball out of there” – that one is designed especially for the defense –  and “Great effort, ____!”.  In addition, any time Kayla does anything on the field that looks good to me, I pop out of my lawn chair like a crazy woman screaming at the top of my lungs, “Way to go, Kayla!”  Any time anyone on the team scores, I also leap out of my lawn chair, screaming something brilliantly original such as “Yea!”

Fall soccer season is short – our last games have to be played by October 15 – so I only have a few more games to try to decipher the rules.  If I don’t, then I am going to show up at spring soccer with my own, rigged tea leaves for the refs to use in making their calls – that way I can be sure that all of the calls are against the other team, not our team!  Because, at the end of the day, the only requirement to be a soccer mom is to have a child in soccer, and to cheer for her team.

Tea Leaves, Ready to be Rigged
from Print Shop Professional 3.0

3 responses to “A Stranger at a Strange Sport: In Which I Become Soccer Mom”