About three weeks ago, several round white spots, maybe two inches in diameter, and a long smear of white appeared on the kitchen floor.  Kayla said she had tried to mop them up, but it hadn’t worked, and neither had vacuuming.

I was tired of looking at them by Sunday, so yesterday evening I sat down on the floor and started working on getting those spots up.  The spots were made by a thick, hard substance, though, and the only way to remove them was to scrape the substance off with a knife.  It was too thin, too uniform and not stretchy enough to be gum but it was too tough to be something like sugar or icing.

After a while, Kayla joined me on the floor to help.  She wanted to know if I knew what the spots were.  I told her I wasn’t sure, but  I was beginning to think I might be better off not knowing.  Realizing I was talking about unwanted critters, she said “Eeee-youuuuuuuuuu!”

She helped me scrape for a while in silence, then she said, “These spots look exactly like someone  got mad and slung the stove top cleaner around without realizing that it wasn’t shut good.” 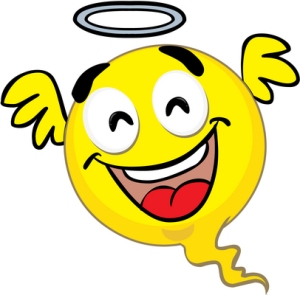 from http://www.clickartonline.com
All Rights Reserved

I sat back to look at her, and she added, “Not that I did anything like that!”

I let her off on a technicality.

(For the record, Mark and I went into the bedroom and shut the door so we could laugh until our sides hurt at her non-confession.)

FN.  We have a glass cook top on our stove, and it requires a special cleaner that rubs on like a paste and then is wiped off with paper towel.  Apparently once the stuff dries without being rubbed off, it is impenetrable.

5 responses to “The Kitchen Cleaning Caper”