Goodbye, Mandy – The Post I Didn’t Want to Write

Grief is a funny thing.  Everyone reacts to it differently, and the same person can have different responses to different situations that cause it.  My grief has given me writer’s block for months.

On Sunday, September 8, 2019 around 9:00 p.m. we had to make the difficult decision to have our loving, mischievous, laid back Mandy put to sleep.  I always grieve when any of our dogs die, but Mandy’s death hit harder in some ways because it was unexpected.  She hadn’t been acting or looking sick even that Friday evening when we went to bed.  But when we woke up Saturday morning, she had gotten sick in several spots.  We figured she had gotten hold of something that disagreed with her (remember, she was our scavenger extraordinaire) and went through the dog-with-a-stomach-virus drill – picked up her water, kept her off food for about a half a day and other such things.  We would put the water down periodically, but she wouldn’t drink too much and she showed a total disinterest in any food we put down for her after the half-day.  So we let her rest, hoping the bug would work itself out in the next day. 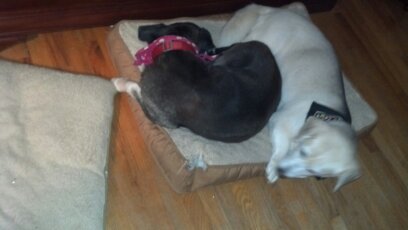 Sunday she still was sick, still not interested in food and not at all her normal self.  We decided we would make sure she went to the vet Monday morning, but by Sunday night we weren’t sure we could wait, so Mark and I went to the Emergency Vet Clinic in Montgomery.   Kayla had school the next day, so she stayed home with Darwin.

They’ve seen her before (check out the incident of the medicinal sock here) but it took about an hour for them to get us back to a room.  Once we were there, they drew some blood and did an exam and told us to wait.

The last two pictures of Mandy at the vet’s office that night: 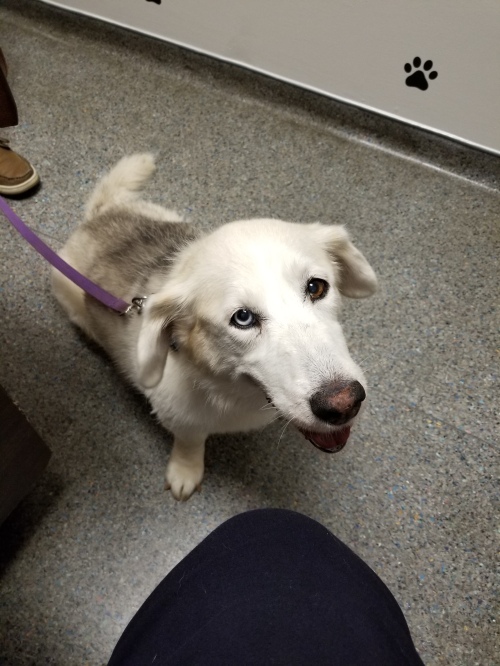 Mandy being Mandy, she didn’t want to wait on the exam table, so I sat on the floor beside her petting her until the vet came back in to talk to us.  The news wasn’t good.  Basically, Mandy’s kidney or liver enzymes were off the charts, which meant she was dying.  There was no treatment; she was just going to get sicker and sicker as time went on.  We could tell she was miserable, so we made the only decision we could.  The vet’s office had a special room where we could stay with Mandy until it was all over with, so Mark and I spent about 20 minutes saying good-bye, and a few more minutes sitting with her while the shots took effect before we said our final good-byes and left.

So now there’ll be one more pet to greet us at the Rainbow Bridge when our time comes.  Heaven will be a lot more fun with Mandy there.

Have a good morning, everyone.

And Then There Were Three….

Some variation of the term “husky basset hound mix” has led people to this blog over 400 times since 2011.  I have always found the popularity of that phrase interesting, since, for a long time, I thought our Mandy was absolutely unique. 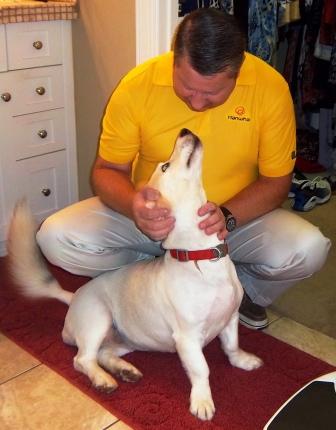 Mandy and Mark in the Morning

Last January, when Sawyer’s owner e-mailed me, having read my post, “A Basset Hound/Siberian Husky Mix“, I learned for that first time that there was at least one other dog out there resembling our precious Mandy.  Just to remind you, here’s a picture of Sawyer. 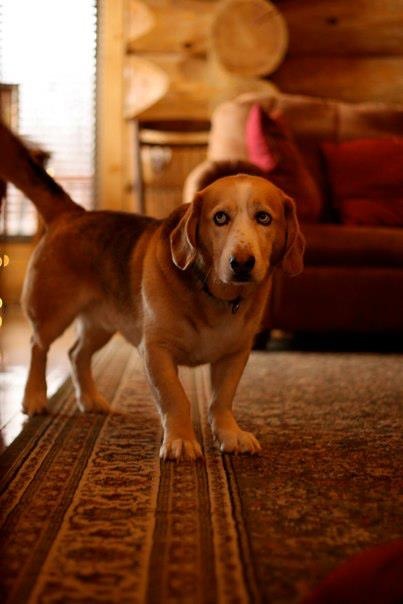 I was delighted!  Sawyer had many of Mandy’s physical characteristics, but not all.  Even more significantly, Sawyer shared Mandy’s joie d’vivre and laissez-faire attitudes. 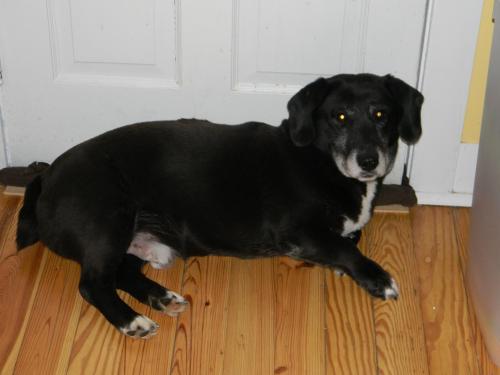 He is the first busky we have found that is mostly black, with a white splash across his chest, but the body shape is there, and, Ms. Hess reports, so is the temperament!

Now, to me, Mark and Kayla, Bo is even more wondrous because of another resemblance he bears – to one of our two dearly departed dogs, Woof.

Can you see the resemblance?

P.S.  Any other Basset-Husky mix owners, please let me know about your dog, too.  Maybe we can make Busky’s as popular as Labradoodles!

A Picture is Worth a Thousand Words….

What’s wrong with this picture? 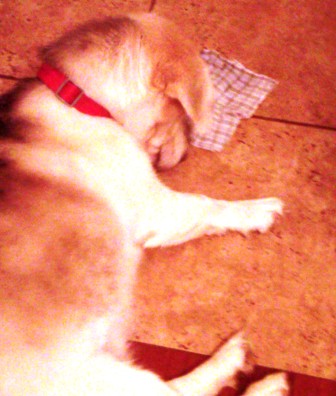 Mandy has a brother?!

As some of you know from some previous posts, I have long wished that the over 50 people who have searched for variations on the term “husky-basset hound mix” would let me know why they are looking for the information;  I have always thought that Mandy is probably the most unusual dog I will ever come across, both in looks and in personality.  Well, two days ago, I got an e-mail from a woman named Needa in Nashville, who has a dog named Sawyer who is – wait for it – also a husky-basset hound mix.  Pictures were immediately exchanged, and the two do look very much alike, especially when they both have been recently groomed.  Sawyer has a little bit more of the red/brown coloring of a basset hound, while Mandy has picked up more of the silver/white/gray of the husky, but still, the resemblance is amazing. 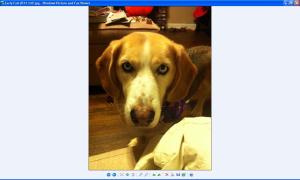 Guess who is who? 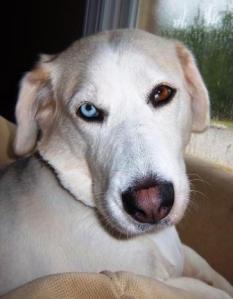 You can see how much alike they look in the two pictures above.  Sawyer’s most obvious difference from Mandy is that he is a male and she a female, but there are other differences.  I think Mandy is a little more solid than Sawyer, although I haven’t yet met Sawyer to have him jump on me with all of his weight concentrated in his front two paws.  Sawyer has two blue eyes, instead of Mandy’s one brown eye with a hint of blue in it and her other completely blue eye.

There are a lot of similarities, too.  Sawyer has a “pageant pose” similar to Mandy’s, although Needa and her husband call it the “noble pose,” which makes sense since Sawyer is a boy.  Sawyer likes to chew – Needa says the first day she had him he demolished her digital camera, which made me grateful for Mandy’s preference for light cords – and does so on about the same four-hour schedule that Mandy holds.  Mandy and Sawyer can be trusted alone in the house for about four hours, then they get anxious about their owners being gone and start demolishing something.  At least they have a good reason; Darwin chews sometimes just for the pure joy of it.  To be honest, Mandy chews handkerchiefs for the pure joy of it also, but the more destructive chewing comes after four hours!

Mandy: Caught with a handkerchief

They have somewhat similar nicknames, too.  One of Mandy’s many nicknames, well-earned, is “Bad Dog.”   Sawyer’s nickname, Bitarbriat, was given to him by one of Needa’s uncles.  The word is Persian for “Spoiled Brat.”

Sawyer dives for something

Sawyer does not have to be bossed around by a child of any age, let alone a ten-year old girl – Needa and her husband just got married three weeks ago!  Congratulations to them.  Here is an engagement photo they took with Sawyer in it. 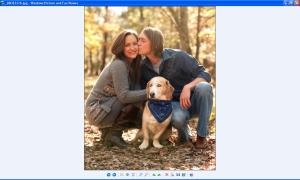 Sawyer was adopted in Huntsville, Alabama at The Ark; someone found him wandering around the roadside there.  Mandy is also an Alabama dog; as you know from a previous post, she was adopted at the Montgomery, Alabama humane shelter, where she had been taken after she had been found digging in the dumpster for McDonald’s.  They both are very independent; I am not sure if that is the basset hound temperament coming out, or if part of that comes from surviving “on the street” for a period of time.

Mandy, awakens from a nap

They both are very loving dogs, too; they just have very high self-esteem. 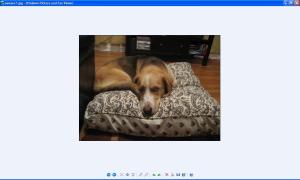 Sawyer on his dog bed

One day, we hope maybe to get the two of them together, but that won’t happen for a while.  Either way though, welcome to Sawyer as a potential cousin, if not brother of our own Mandy, and thank you to the many friends and relations of Needa who have stopped by this blog in the past two days to look at pictures of Mandy.  I hope you’ve enjoyed your visits!

Sawyer gets ready for the wedding

If anyone out there stumbles by this blog and has a husky-basset hound mix, please let me know.  I’d love to hear about him or her!

Mandy in the kitchen