The Twins of Trouble and Easter Allergies 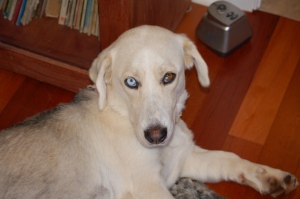 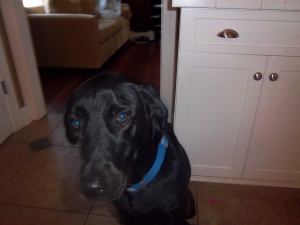 For those of you who have been wondering about No-No and Bad Dog, they are still alive and well.

On Saturday we bought a four pack of stuffed animal chew toys, and so this week the Twins of Trouble’s (they look like twins, don’t they?) chewing efforts have been focused on the three of the four toys we went ahead and put out. 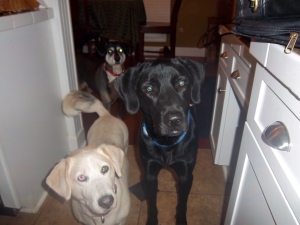 I am glad the dogs like the toys, and even more amazed that they have lasted for a week!  Usually, it takes about a day, and then the stuffing has been released and strown all over everywhere.

We still come across the occasional handkerchief lying on the floor in odd places, or the occasional shredded napkin or paper towel scattered somewhere far away from its point of origin or hear the occasional scrape of paws as they slide off of the kitchen counter, having ascertained that nothing is available for retrieval, but we haven’t caught either of them red-handed for a while. 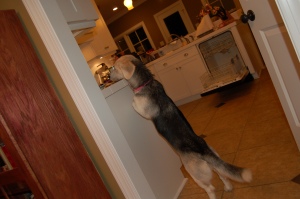 Most of the time, you see Darwin running by with a stuffed toy in his mouth, and Mandy in hot pursuit, or vice versa.  Occasionally, they are each holding one end of the same toy and running around the room in tandem.  One toy has been put carefully aside by Tyra, who doesn’t chew hers; her chew toy is a treasured doll that she doesn’t allow anyone else to mess with.  The other two toys appear to be interchangeable.  When we got home yesterday, and I was trying to let the dogs out to the back yard, Darwin, with one of them in his mouth, took a spectacular running start toward the back door, until he realized he was going to run out of floor much faster than he expected.  At that point he put on the brakes, sliding five feet plus on the wood floor and only stopping once his momentum took him underneath Mandy, pushing both of them outside.  I’m not sure Mandy knew what hit her; she is so low to the ground that this may be the first time anything has managed to slide under her.

Wednesday is our busiest day.  Not only do we have the regular activities of school and work, but Kayla has dance after school, and then we go to our church for Wednesday evening choir practice.  Currently, the adult choir is getting ready for our Easter performance, which is a beautiful musical arrangement entitled “A Hill Too Far Away.”  It has a great message and I am looking forward to our performance on the 17th, but it is a fairly demanding work, at least from the alto standpoint, with notes ranging from a low G up to the D that is an octave away from middle C.  When the choir finished practicing one particularly demanding song last night, we burst out into so many coughs that we sounded like a tuberculosis ward.  We couldn’t help it – all of us laughed.

I have long known that God has a sense of humor; why else make sure that Easter and allergy season always coincide?  Maybe He just wants us to remember who actually gives us the ability to sing.  I also, however, have a sneaking suspicion that He laughed along with us when He heard all the coughing at the end of practice.