Golf is a game whose aim is to hit a very small ball into an even smaller  hole, with weapons singularly ill-designed for the purpose. – Winston Churchill

It has been early spring since I played golf.  Of course, I use the term “play” quite loosely – a better description of my golf game involves the use of the terms “machete” and “hack” but you get the idea.  Mark is much better than I am, but due to a condition similar to Phil Mickelson’s psoriatic arthritis, some days he plays better than others.  Kayla’s golf game has yet to be defined; she currently has been told that she plays a specialized position known as “ball spotter and fetcher” which requires a person to run out and retrieve balls from a distance, but does allow a chance at a shot or two to the green from a short distance away, along with an occasional turn at driving the golf cart.

The reason the pro tells you to keep your head down is so you can’t see him laughing. ~Phyllis Diller

Even though we haven’t played golf, not even gone to the driving range, since about April, we do watch it quite frequently.  The pros make it look so easy!  The magnificent way they step up to a ball, take a swing and hit it continually amazes me, not to mention the fact that they can make that same ball travel an amazing distance in a straight line!  This year’s Master’s finish was one of the most exciting finishes to a pro tournament I can remember for a long time, and I think we all were excited to see Rory McIlroy, a young (to me) Irish kid who seems as nice as he possibly can be, win the U.S. Open.  The pros make me believe for one shining moment that I can hit the ball – until that deflating moment when I stand at the first tee of the first hole, carefully place my ball on the wooden peg, take my practice swing, then swing with everything I have – only to find that I completely missed the ball, yet again.

If your opponent is playing several shots in vain attempts to extricate himself from a bunker, do not stand near him and audibly count his strokes. It would be justifiable homicide if he wound up his pitiable exhibition by applying his niblick to your head. ~Harry Vardon

However, Mark, my husband, had a brilliant idea while we were at the beach, driving around and passing by golf courses on which I never will be good enough to play.  (Why do they insist on putting people’s houses on either side of the fairway?)  He calls it “Mark’s Golf Course for Regular Guys.”  Its motto is “Golf – for the Rest of Us!”  He has gone so far as to prepare the following prospectus:

Mark’s Golf Course for Regular Guys:  The only water is in bottles and par is a theoretical ideal, not a hard and fast goal. In fact, score cards are generally frowned. The greens all slope toward the middle like a big drain and mulligans are in vogue. The quality of the golf may not be world-class, but there is plenty of barbecue and good friends. Prices are low, the scores are high and everyone has fun. For investment opportunities contact….

I intend to be one of the first customers!

I know of a great tool that will take five strokes off  any game.  It’s called an eraser.  – Arnold Palmer

Posted in Just stuff..., working mom, Wow! I never thought of it that way before.

The Second Rite of Spring

Good morning everyone!  I hope you had a great weekend! 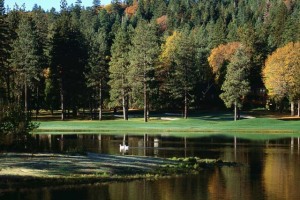 Our weather here was perfect, leading us to the second rite of spring.  (The first rite of spring is described in my March 23, 2011 post, “Spring!, Butterflies and Roosters.”)  The warm air and soft breezes, laden with pollen, begin to play tricks on the mind, and sudden images of me carrying a greatly enlarged metal typewriter stick, with a weird shaped mass of metal at the end of it that resembles a cross between a rectangle and an oval begin to dance through my overheated brain.  The sudden onslaught of ads for major tournaments such as The Masters feed the delusion and present images of me using said club to make graceful hits on a small, white pocked ball that send the ball soaring away at lofty heights only to be rivaled by the greats of the game such as Annika Sorenson and Nancy Lopez.  At that point,  my common sense is swamped, so I suggest to (or agree with) Mark that we should go play a round of golf.

Such a moment happened this weekend, and before you could say, “Verily, verily I hath failed to hit the ball yet again,” the entire family was loaded into the car with two sets of golf clubs.

My set is in almost perfect condition, even though it is over a decade old.  This is because my golf outings are usually limited to the first delusional outing each spring, and then the occasional trip with Mark.   The plan was to play at a course at a nearby city which often is uncrowded.  This works well for us because not only does it let me play as best I can under scramble rules with Mark, but Kayla, who usually acts as ball spotter and retriever with an occasional turn at golf cart driver if she begs long enough and hard enough, can come with us too and get to hit once or twice on the green .  (Scramble rules are where everyone who is playing hits the ball, and then everyone gets to pick up their ball and move it to wherever the farthest ball is.)  Most of the time, I don’t even try for a tee shot, just start my play about 100 feet or so from the hole.

However, that plan was frustrated because the course we like was hosting a tournament, so no tee times were available, which led us to Plan B, the driving range.  Mark and Kayla reached the range first, so I had the opportunity to take a picture or two  before I had to start practicing myself. 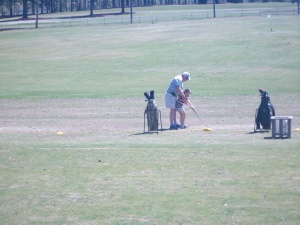 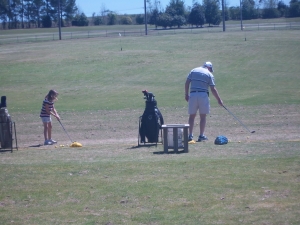 Both Mark and Kayla get ready to practice 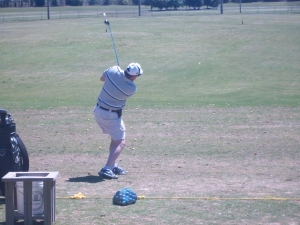 Mark right after one of his best shots of the afternoon 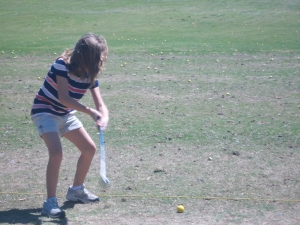 Kayla giving it her best effort!

Finally, it was my turn.  I reached the driving range, placed a ball in front of me, studied it carefully, placed my club up against the ball to be sure everything was in place, pulled back once, swung my club down slowly to double-check I would hit the ball where I wanted to, and then, everything on go, I pulled the club back one more  time and gave a mighty swing – at which time all the delusions in my head popped away.  The ball still sat exactly where I had placed it.

The “missing of the ball” is the first event in my golf season every year.  Since we were at the driving range, I then began the process of trying to hack, ….er, hit the ball in progressively better ways to try to improve my golf game.

There are unique rules to driving range play.  The first is that you will never hit a really good shot when someone is looking.  Resign yourself to it.  I do hit maybe three or four decent shots out of the 20 to 40 golf balls available to me each session, but they are always when Mark and Kayla are looking the other way.  The second rule is one of proportions – the amount of time I will get to spend hacking…er, hitting… the ball decreases geometrically to the number of balls Kayla wants to hit.  She needs encouragement and unlike adults doesn’t understand when Mom and Dad don’t see the good shots that she hits.  The third rule at the driving range is that just at the moment you decide that this is a really stupid game, you will never get good at it and you might as well quit, you hit a truly beautiful shot that stupefies your senses back into the delusion that you will be playing better sometime soon.

While I was hitting, I unfortunately left the camera in a place where it could be accessed by all; hence Mark ( or Kayla) caught this picture of me meditating with the ball: 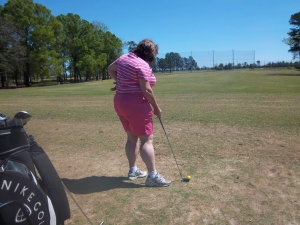 Pulling the ball into position

About an hour later, we finally had hit all of the balls in the bag of range balls we had purchased, (it takes a while when two of the players need two or three shots just to hit one ball) so it was time to head home.  As we drove home, I could already feel the memory of the bad shots (or non-shots) I had slipping away from me like water and the memory of the good shots expanding.  In another couple of weeks, the delusion will have set in again, and we’ll go back for more! 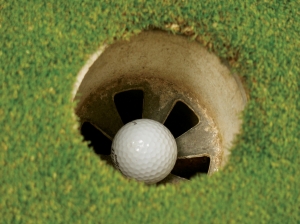 Posted in Just stuff..., The quest for health, When things don't go as expected, working mom