We will pick up the threads of the story many generations down the road, with a member of the Ugg clan who had migrated to Egypt.  Ugghotep had a baby girl, Alleytiri, who was the apple of his eye.  (I should explain that the best historical records we can find indicate that early on, the Clan of Ugg was united by marriage with the Clan of Alley.)  As the oldest son in that generation of the Ugg clan, Ugghotep had inherited the original bowling stone Ugg had used, although by this time it was much smaller and smoother, having been worn down through the ages by so much use.  Since trying to bowl down Alleytiri was unthinkable, and with only one child would have been really boring anyhow, he invented a series of blocks that he and Alleytiri could bowl down together.  Unfortunately, as all children do from time to time, Alleytiri managed to lose the ball and pins, and they were found centuries later by archeologists.  This set of a round ball and pins is considered to be one of the oldest bowling type artifacts ever found. 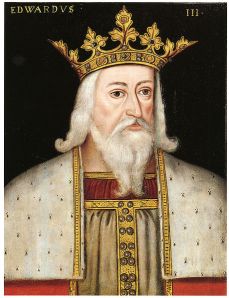 We will lightly skip ahead in history to the mid-1300’s in England, when Sir Alley Ugg of  Diffing Green couldn’t help but notice that time was hanging too heavily on his archer’s hands, when arrows started appearing through the flags flying off the roof of the castle (not to mention the one that went through Lady Uggette’s of Diffing Green’s skirt on her way to church – it was shot by a particularly bad archer) and so introduced his family’s game to his archers.  The game quickly grew in popularity, and spread to other parts of the country, to the point where King Edward III banned bowling because his archers were spending too much time bowling and not enough time practicing archery. 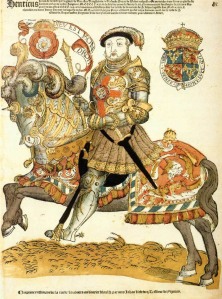 King Henry VII on horseback, chasing after a stray ball rolled by one of his ladyfriends

A few hundred years later, though, it is reported that Lord Ugg Oop of Diffingshire (Diffingshire included the original lands of Diffing Green) introduced Henry VIII to the sport of bowling where it became very popular in King Henry’s court and thence throughout England.

Eventually members of the Ugg-Oop clan emigrated to America, where unfortunately some of them slipped closer to the wrong side of the law.  Ugg Oopone, one of the seedier members of the family, saw a ….. ummmm… “business”  opportunity in the game of bowling, and set up a parlor in New York where people could bowl with nine-pins, and bet on the results.  This activity spread outward to places like Connecticut, which eventually banned nine-pin bowling because of the gambling problem.

However, more reputable members of the family from Kentucky (where did you think Bowling Green got its name?) decided to use ten pins and reestablished the game as a more family friendly activity. 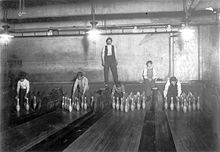 In the 1950’s, Oop Ugg Smith was working as a pin setter in his father’s bowling alley.  After a close call involving an airborne bowling ball and an argument between a husband and wife patron, his enthusiasm for the game dimmed.  Still, he didn’t want to leave his father in the lurch, so turning his very talented mechanical mind to the problem, he, along with his friend Gottfried Schmidt,  invented the pin-setter.  Gottfried, with Oop Ugg’s blessing, later patented the invention and sold the rights to the patent to the American Machine and Foundry Company (now AMF), which at that time was a maker of machinery for tobacco, apparel and bakery businesses.  Now, AMF Bowling Centers, Inc. is the world’s largest owner and operator of bowling centers. 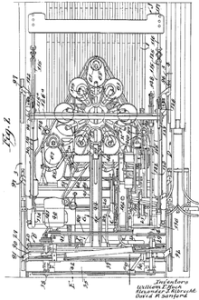 Although Oop Ugg Smith never came back to the game after his narrow escape, his children learned to love the game from their grandfather, and one of Oop Ugg Smith’s grandchildren, Alley Uggette Smith, loved the game like none of the Ugg clan had ever loved it before.  There was only one problem – Alley Uggette simply could not bowl.  No matter how hard she tried, her balls continually veered right or left in time to reach the gutter.  However, being as mechanically minded as her storied grandfather, Alley Uggette studied the problem carefully and came up with what I consider to be the greatest of all bowling inventions (because without it, I too would bowl only gutter balls), the GUTTER GUARD!!!!!  After that, Alley Uggette could bowl with the best of them; in fact, she became the expert on using a ricochet off the gutter guard at high-speed in order to conquer that most awkward of all bowling set-ups, the split. 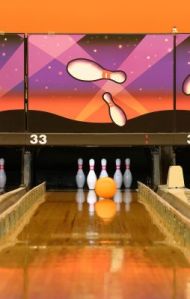 Bowling Lane with Gutter Guards Up

And with the gutter guard, and the split, we have come full circle in the history of bowling.  You may not remember from the first post, but the first turn in bowling history by Ugg the First resulted in a split, with the smaller children scattering to avoid the ball, but the oldest two standing tall and firm.

Until the next time  we have a chance to explore the history of the Ugg clan, or until I think of something else to write about, have a great day everyone!

6 responses to “A Highly Biased History of Bowling, Part II”