For those of you who perhaps have been spelunking or exploring untamed wilderness with no internet, TV or radio access, the 2012 Summer Olympics are being held in London right now.  Every night at seven, millions of Americans are tuning in to their local NBC channel to watch a “greatest hits” version of the Olympics, while as many as can possibly do so are also watching the events live during the day.

My family is no exception.  At 7 on weeknights, Kayla and I invariably ask Mark (as the male in the family, he apparently acquires by divine right sole access to the TV remote – well, divine right and the fact that the *&*&$*^#$#@&%$%&* thing refuses to work correctly for me or Kayla) to switch the television over to NBC, and the three of us watch whatever events might be on. 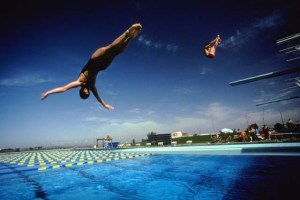 We turned on the other night to discover an event we weren’t even aware existed – synchronized (or, as the British would write, synchronised) diving.   FN1.   This was an event the three of us never dreamed existed.  Basically, instead of just one diver performing extraordinarily difficult and athletic dives, two divers are required to perform the same extraordinarily difficult and athletic dives as nearly as possible at the same time, with points given or deducted on top of the normal diving points for how temporally coordinated the performances are.  I have to wonder at what post-Summer Olympic meeting the diving committee came up with that idea.  I can just hear them now, at the after-dinner aperitif stage:

Hey guys, since the divers are beginning to get so good at the dives we thought were impossible to do, how ’bout we up the difficulty factor by making two of them dive at the same time!  That’ll show them!

Other Olympic events just seem vaguely incomprehensible to us.  For example, cycling.  I understand the concept of a bicycle race – you throw anywhere from 2 to 100 bicycles together at one place, called a starting line, and require them to travel to a second place, called a finish line, and the one that gets there first, wins.  But we saw an event one evening that I am still trying to figure out (not too hard, or I would have googled it by now) – teams of three bicyclists each on bikes without spokes in their wheels travel around an indoor track together.  I’m not sure how the winner was determined or what rules applied, except for the rule that each team of three bicyclists had to follow each other in a straight line.   FN2.

I pulled a list of the sports that are included in the summer Olympics.  Many of the Olympic events are fairly familiar to me, such as swimming, diving, racing and gymnastics, but others are not, although nothing in the summer Olympics is as foreign to me as the winter Olympic event of curling.  For example, rhythmic gymnastics, which appears to require the gymnasts to do routines with swirly ribbon things besides them, appears a bit odd at first blush, and who would have thought that “trampoline” was an Olympic sport, while neither baseball nor golf is?  (Actually, I believe baseball used to be an Olympic sport, but I am not sure about it.)  Badminton and ping-pong – excuse me, I mean table tennis – are fun to play, but I am not exactly sure how they rose to Olympic status.  I would love to see more of the Olympic events involving shooting, archery and fencing on TV, but at least so far I have managed to miss them. 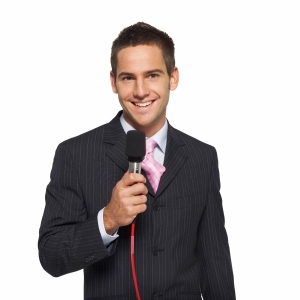 Whether the sport is familiar, ie., soccer, or foreign, ie. rhythmic gymnastics, to me, one of the best things about watching them on TV is the commentary given by the announcers.  Somehow, NBC has managed to acquire individuals who are familiar with the sports they are showing, and the commentators help explain both the sport and how the contestants are judged.  That way, even if the sport is something completely new to me, I manage to learn a little bit while I am watching.

So kudos to the announcers, and to NBC who has managed to find commentators that can explain the events and scoring in sports like synchroniz[s]ed diving and rhythmic gymnastics, and here’s to another few days of the Olympics Learning Experience!

Now, if you’ll excuse me, I think I’ll try to find a televis[z?]ed trampoline medal event….

FN1.  One key spelling difference between British English and American English is the use of “ise” and various forms thereof (British) versus “ize” and various forms thereof (American) in certain words such as “synchronis[z]e.”  With the wonderful consistency that characterizes the English language, we Americans have graciously refused to “ize” some words, such as “televised” and “supervise.”   Either that, or someone just made a typo that stuck, since “s” and “z” are suspiciously close to each other on the keyboard!

FN2.  Regardless of how unfamiliar I am with a sport, I want to emphasize (or is it emphasise?) how much I respect the athletes who compete in ANY Olympic event – the training and prowess and effort each athlete brings to the games honors their country regardless of the final medal count.

2 responses to “The Olympic Learning Experience”