Having either fully recovered from my bronchitis, or being perfectly poised for a relapse, I’m not sure which, I am more than overdue in starting my posts back.  It’s good to be back with you!

From Print Shop Professional 3.0
Used under license; protected by copyright

Boo in the Preferred Dog Bed

Mandy and Tyra have been politely warring over the fake fur bed for quite a while; Tyra in particular keeps trying to go to bed earlier and earlier so that she will have (and keep) possession of the fake fur bed over the other one, forcing Mandy into one of the two other beds.  Last night, I caught Tyra entering the bedroom at 6:30 so she could lay claim to it.  When Mandy misses out on the fake fur bed because she has stayed up later than Tyra, you can tell from the expression on her face that she really is quite miffed, which sends me into hysterical giggles.  (Mandy is so unflappable about most things it really is funny to see her nose out of joint!)

When Darwin entered the bedroom ranks, we supposed that he would take over the brand new dog bed, but that is not how things worked out.  Darwin infinitely prefers to sleep on our bed, but since we don’t allow that (he’s just too big), he has had to settle for his second choice.  For example, last week, Tyra got the fake fur bed, and Darwin managed to curl all of himself (I still don’t know how he does it) into the small old bed, leaving Mandy with the big, new bed.  She stared at the other two for a while, hoping to stare one of them off of the other two beds, but that didn’t work – especially since the other two dogs had their eyes closed already – so after I turned the light out she started trotting back and forth in the bedroom. 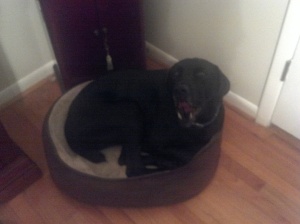 Darwin in the Small Dog Bed

In the old house, that didn’t matter too much, but in our rental house, where there is only wooden floor and no carpet, there is only so much tap-tapping of a dog’s paws one can take at night.  Eventually it sounds like the entire cast of Riverdance is pacing around the bedroom in taps desperately trying to find the stage entrance.  I got up, frustrated, but then Mark suggested that I bring the second small old dog bed from the den into the bedroom and put the new dog bed in the den.  I did so, expecting that Mandy then would get into that bed and everyone would be still where I could go to sleep.

Tyra in the “New” Round Bed from the Den

I had to go into the other room for just a minute, and when I came back, everyone was settled in nice and comfortably, but not as I expected.  Tyra stayed on the fake fur bed, but Darwin had co-opted the old small dog bed from the den, leaving Mandy with the old, small dog bed that was in the bedroom originally.  I’m not sure what the difference was, but it mattered to Darwin.  Mandy, at least, was mollified.

Last weekend, I decided to move the old, small dog bed from the den back to the den, and to replace it bought a bigger round bed that had more room.  It’s probably not much of a surprise that Darwin co-opted that bed.  Mandy is now beginning to regularly lay claim to the new, rectangular dog bed that she formerly rejected.  She’s managed to get it squished up into just the right shape.